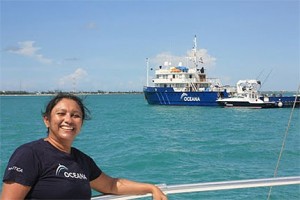 In the Belize Supreme Court today, Justice Legall struck down the Government of Belize’s (G.O.B.) application to strike out the claim brought by Oceana, the Coalition to Save Our Natural Heritage and the Citizens Organized for Liberty through Action (COLA) which challenges the legality of the Production Sharing Agreements between the Government of Belize and six offshore oil exploration companies.

Although the Supreme Court of Belize is formally in recess until September 15, 2012, Justice Oswald Legall continues to hold and hear court cases. According to Belize tradition, two justices, one civil and one criminal, remain to hear urgent and arising matters, and may even hear continuing matters while their colleagues take a six-week “summer” break.

The tradition of a summer break (and a two-week Christmas break, and a three-week Easter break) is a holdover from colonial times and pre-air conditioning days when the sweltering August heat forced much of the public service bureaucracy and schools to seek cooler parts of the country to wait it out.

This morning in Justice Legal’s court, attorneys for the GOB argued that he should agree to their application to have case #810 of 2011, filed on December 21, 2011, struck out. Crown Counsel Herbert Panton from the Solicitor General’s Office argued, using an almost similar example case, that last month’s decision by the Belize Court of Appeal in the case ‘Gilharry’s Bus Line versus Transport Board and Others,’ applied only to Judicial Review and that the Claimants had failed to stay within the Limitation period required for them to pursue any legal claim.

On June 7th, the respondents who is the GOB, had filed their application for the “strike out” on the grounds that the claimants, a group comprised of Oceana Belize, COLA (Citizens Organized for Liberty through Action) and the Belize Coalition to Save Our Natural Heritage, had failed to comply with Part 56.3(1) of the Court Procedure Rules by not seeking permission for Judicial Review. The group also failed to comply with Section 27(1) of the Limitations Act, because the claim had been brought outside of the one-year period accorded, and was therefore statute barred.

The hearing on the application for “strike out” was adjourned on July 5th, 2012, pending the written decision of the Belize Court of Appeal on the Gilharry v the Transport Board case, handed down on July 20th, 2012.

Panton, assisted by Deputy Solicitor General Nigel Hawke, argued for a narrow interpretation of the decision, saying that to “interpret it any broader is to invite judicial adventure”. In answer to sharp questioning from Justice Legall he said that in his view the decision “was never relevant” anyway.

In turn, the Claimants’ attorney, Senior Counsel Godfrey Smith, argued that “proper examination of the Court of Appeal’s decision in the Gilharry matter fortifies the Claimants’ position that the Public Authorities Protection Act is confined to private law matters and, as such, there is no limitation period for parties seeking action against the Government in matters of public law.”

In nearly all of the recent cases brought against the GOB, their first line of defense is the Public Authorities Protection Act which delineates who, when and how such cases are to be brought. There is some consensus that the Act is outdated if not antiquated and has been superseded in large degree by the adoption of the Court Procedure Rules.

Justice Legal handed down his decision today Friday, August 24th and ruled in favor of Oceana and other interested parties. The learnt Justice agreed that the Court of Appeal’s July 2012 decision in the case ‘Gilharry’s Bus Line v. Transport Board and Others, which was introduced by the Claimant’s Senior Counsel, Godfrey Smith indeed bore precedence in the trio’s case against the government, reiterating that the Public Authorities Protection Act is confined to private law matters and, as such, there is no limitation period for parties seeking action against the Government in matters of public law.

The Supreme court equally did not agree to the argument brought by Crown Counsel, Herbert Panton that Oceana et’al’s failure to seek permission for judicial review was detrimental to their request asking for certiori (quashing an act) as a possible relief should their case be successful. Justice Legall, citing a 2007 ruling by the Caribbean Court of Justice (CCJ) in the case Watson v. Hernandez stated that Courts exist to deliver Justice and quoted from the noted CCJ case that, “Justice is not served by depriving the parties of the ability to have their cases decided on the merits because of a purely technical procedural breach.”

Commenting on the significance of this ruling Oceana in Belize’s Vice President, Audrey Matura Shepherd stated, “We are pleased with the decision and await to have the evidence in this case be placed before the court and a final ruling being made. Justice is served when citizens are not barred from accessing the courts to question the decisions of governments because good governance is about making decisions in the best interest of the citizenry and in this situation where these contracts go against our own laws, it is the citizen’s duty to let our government officials know that not even they are above the law.”

After the ruling Crown Counsel Panton rose to inform the court that on Monday they intend to file an application asking the court to now strike-out the affidavit evidence of Bob Danenburg, a petroleum expert who is slated to give evidence on behalf of the claimants. The basis for this request is not yet known. The parties return to court September 12, 2012 to determine the status of this application.