The John Greif II San Pedro Airstrip was officially renamed, unveiled and inaugurated after being in renovation for the past two years. The event took place on Thursday November 8th and present for the occasion were members of parliament as well as members of the Greif family and other high profile dignitaries and local airline representatives. The event was twofold: to officially inaugurate the airstrip and to officially unveil the renamed airstrip that proudly boasts a bronze bust of the late John Greif II. 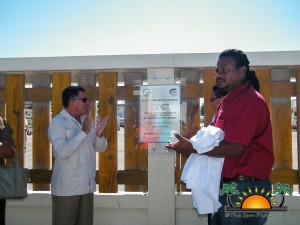 Officially welcoming the dignitaries to the event was Mayor of San Pedro Town Daniel Guerrero who said that project is welcome and will enhance and compliment the evolving tourism industry and the fast-growing municipality of San Pedro. Following Mayor Guerrero’s welcome remarks, Louis Ake, the Regional Manager of Central American Corporation for Air Navigation Services (COCESNA) in Belize, explained the magnitude of investment that was pumped into the renovation of airstrip facility in San Pedro. “More than US $2.3 million has been invested. This project was comprised of the following: the construction of 2175 meters of perimeter fencing, the rehabilitation and resurfacing of the runway and the taxiway, the construction of a new airport parking area, the installation of the runway and taxiway lights and the installation of a precision approach pathway indication lighting system which will provide visual aid for landing aircraft. The project was financed and managed by COCESNA,” said Ake.

Delivering remarks on behalf of the Greif family on this memorable occasion was Celi McCorkle, who gave a detailed history as to how the aircraft industry was established with the arrival of John Greif II to San Pedro. According to McCorkle, John Greif came to Belize in July of 1957. He fell in love with San Pedro upon his first visit, and it is here that he created a family, and pioneered the airline industry for the country of Belize, of which Tropic Air, the family airline, is a major part of. 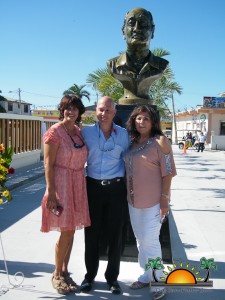 Guest speaker for the event was the Minister of Tourism and Culture and Area Representative Manuel Heredia Jr., who saw the start of the renovation of the airstrip when he was responsible for Civil Aviation two years ago. “The John Greif II San Pedro Airstrip is Belize’s and the region’s busiest aerodromes. It is the major gateway for our tourism industry here in San Pedro as well as a key transport hub for local travel, emergency medical services for the island, daily freight services and a conduit to other services for the Belizean public. For tourism in Belize, it represents one of the most important transportation assets for the country, as air connections are a critical factor for the development of a tourism destination like Ambergris Caye. This makes the island much more accessible to its source tourism markets and offers the growing level of convenience being demanded by today’s global tourism market,” said Heredia.

At hand to officially cut ribbon and for the unveiling of the renaming and inauguration of the newly renovated airstrip facility was Minister Heredia, Minister of Works and Transport Rene Montero and the Minister of State in the Ministry of Works and Transport Edmund Castro and Barbara Miller of the Belize Airport Authority. Following the inauguration of the airstrip, a large bronze bust, mounted on a marble platform and depicting John Greif II was unveiled by Celi McCorkle, Celi Jean Greif and John Greif III. The renovation of the airstrip facility took 22 months to be completed.