The second phase of the ‘Belizean Traveller Campaign,’ spearheaded by the Belize Tourism Board (BTB) has been launched. The project is designated to promote domestic tourism by encouraging Belizeans to be tourists in their own country. In its fourth edition, the campaign seeks to honour some unsung heroes who worked during the COVID-19 pandemic via an Essential Workers Competition. Nominees within the Ministry of Health (MOH) and the Belize Police Department have been identified, and votes can be cast online. They include San Pedro’s Dr. Javier Canul and Police Constable Harris Gabourel, who along with six other candidates, are in the competition for an essential worker award that includes a vacation getaway. 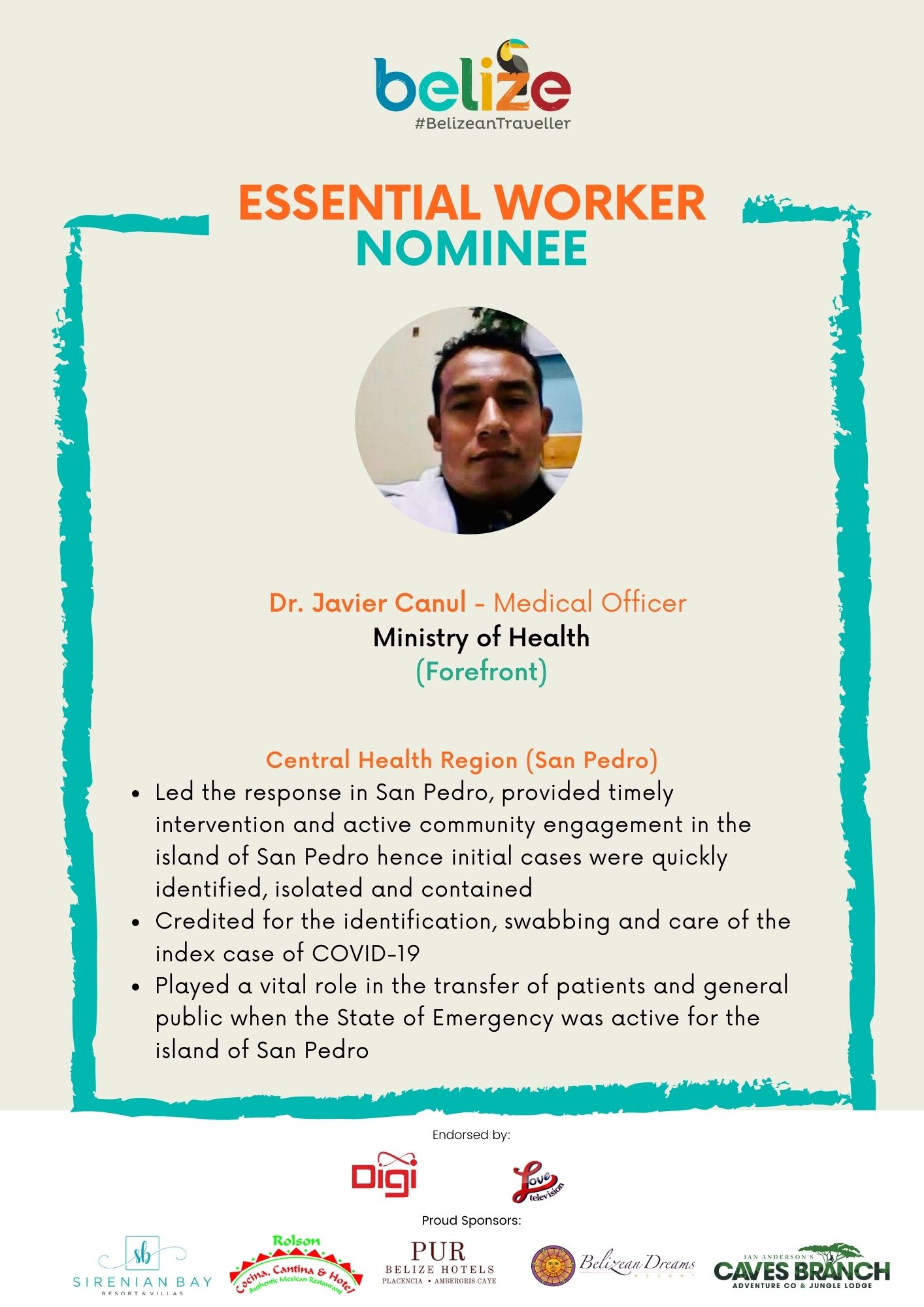 The other participants within MOH include Brendel Gibson, Lama Perez, and Melissa Dias. The other Belize Police Department nominees are Stephanie Patten, Patrick Genitty, and Roger Augustine.

To vote for your favourite nominee, visit the Belizean Traveller Facebook page using the reactions as shown in the flyer. Voting will end on August 5, 2020, and the four nominees with the most reactions will be announced on August 7, 2020.

The first phase of the annual campaign was launched on May 15th, and saw an overwhelming response from Belizeans. According to BTB, during mid-May and June, over 4,000 Belizeans were tourists in their own country, taking advantage of the promotional packages promoted via the Belizean Traveller Facebook page. The bookings were also done directly with the 126 hotels on www.belizebookings.com. The important aspect of the Belizean Traveller includes the Ambassador component with local DJs, who have been promoting the campaign in their respective shows and social media platforms.

The purpose of the Essential Workers Competition

The Essential Workers Competition aims to highlight hardworking individuals, who have gone beyond the call of duty to serve the country. BTB’s Community Outreach Project in conjunction with the Belizean Traveller Campaign, decided to recognize the unsung heroes, who have been exemplary during this most challenging time in the nation.

There are two categories under the MOH, which include ‘forefront’ and ‘behind the scenes.’ One winner will be selected from each category. Under the Belize Police Department, there is only one category- ‘frontline,’ and two winners will be selected. 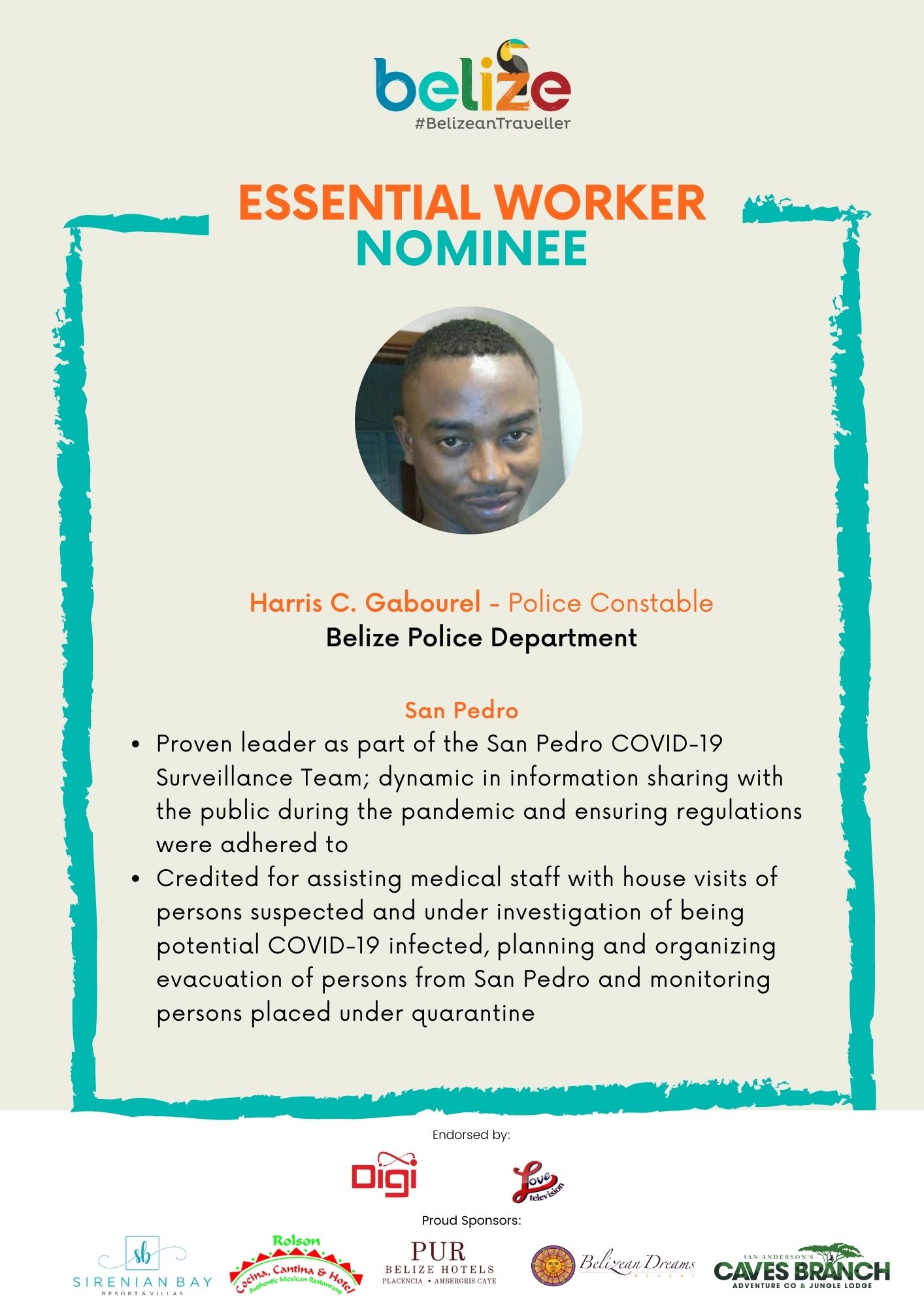 Each winner will be receive a vacation package of two nights’ stay in any of the following properties: PUR Boutique Cabañas on Ambergris Caye, Rolson Hotel in San Ignacio Town, Cayo, Sirenian Bay Resort and Villas on the Placencia Peninsula, Stann Creek, or Belizean Dreams Resort in Hopkins Village. Other options include Caves Branch Jungle Lodge along the Hummingbird Highway. In addition, cash prizes will also be part of the package.

The BTB encourages Belizeans to be on the lookout for new specials coming onboard daily on its social platforms. Any hotelier who would like to offer discounts as part of the Belizean Traveller Campaign can contact BTB at [email protected].