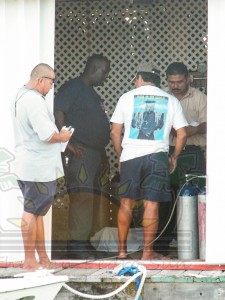 The community of San Pedro is in shock after a well known tour guide died during a very unfortunate accident. Shorty around 4:30PM there was a resounding explosion on Amigos Del Mar dock in San Pedro Town. The explosion claimed the life Hector “Chapin” Duran. 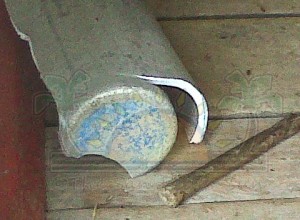 Both San Pedro Police and Fire personnel responded immediately, but there was nothing much that could have been done. According to witnesses, the explosion came from inside a partially enclosed area on the far eastern end of the dock. The explosion was apparently caused after a tank filled with compressed air blew up and fatally injured Duran, who was servicing the air tanks. It is not certain what caused the tank to explode at this time, as fire officials and police continue to process the scene.
Duran sustained massive trauma and was declared dead on the spot by Dr. Laurenzco Nicholson. His body has since been transferred to the KHMH for a post mortem examination. The San Pedro Sun will share any further details if/when they become available.