Late Thursday night, October 8th the San Pedro Fire Department (SPFD) was alerted of a fire underway just north of the Sir Barry Bowen Bridge in the Tres Cocos area. The fire occurred at an abandoned building on the beach about two hundred yards from the road. The fire was declared extinguished, however, early on Friday morning, October 9th, the fire station was once again notified about another fire at the same abandoned building. 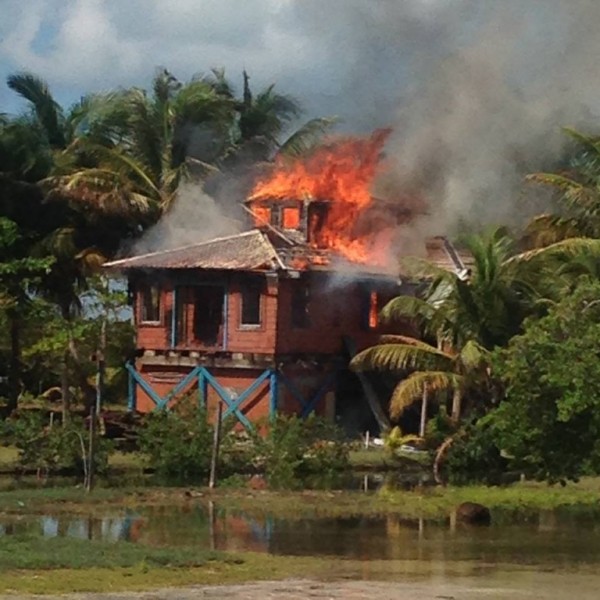 According to reports from the Officer in Charge Newton Lennan, the fire seemed to have rekindled early on Friday morning and gutted part of the building. “When the fire started again and continued burning the building I went to go and make an assessment, and then returned to the station to get the portable pump because our main truck was out of water. Even though we were challenged not having the truck that usually takes the portable pump in working conditions, we still managed to reach the site and extinguish the fire. At the moment, we are trying to find out who is the owner of the property so we can complete our reports,” said Lennan. There are some speculations as to what caused the fire, but at the moment the SPFD is investigating its possible cause. “There are speculations going around, but we have not confirmed anything yet. Until investigations are completed, we cannot point fingers at anyone for causing the fire. In the case that we confirm that it was intentionally caused, then we will engage in a different process to solve the matter,” stated Lennan.
Residents of the area informed the fire station that the abandoned building was believed to be demolished and built back again. No other information has been forthcoming regarding the building, or what purpose it served before it was deserted.
Recently, the SPFD has been alerted of fires around the island via the police station. For any fire emergencies, the general public is reminded that the fire station does have a direct number to contact in cases of fire emergencies. That number is 206-2372, and is available 24 hours a day, seven days of the week.

Sailboat runs aground on reef off Ambergris Caye