A traffic accident left a three-year old boy with minor injuries, when the motorcycle he was being transported on slammed against a golf cart. The accident happened after 9PM on Friday, October 21st on Angel Coral Street. The collision was so strong that both the baby and his father, who was driving the motorcycle, were ejected onto the pavement. 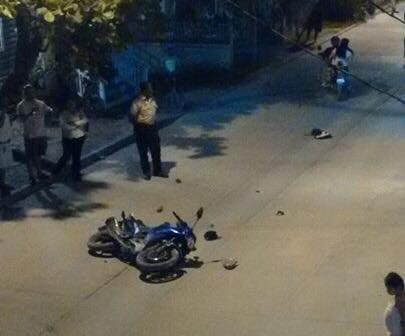 The official report from the investigating officer at the San Pedro Police Station states that the minor was immediately transported to the Dr. Otto Rodriguez San Pedro Poly Clinic where he was treated. After different tests, the baby was released with slight bruises on his arms. The report details the chain of events of the accident and cited that 46-year-old Rene Vasquez was in front of Caye Supplies when he decided to make a U-turn in the middle of the street while driving his golf cart. According to Vasquez, he looked on both sides of the street and did not see anyone coming on either side of the road. He further told the police, while making the turn he heard a loud screeching followed by a loud bang.
However, according to the driver of the motorbike, 18-year-old Elmer Castro, he was traveling with his three-year-old son at around 20 miles per hour and did not see the golf cart. According to him, the golf cart just turned from nowhere, and due to the short distance between him and the vehicle he could not avoid the collision. When the tire marks printed on the pavement were measured, they stretched nearly 40 feet before colliding with the golf cart.
At this point, no charges have been made as both parties have agreed to solve the incident through insurance. However, police will continue their investigations into the accident as it is believed that Castro was under the influence of alcohol. Castro was required to submit a blood and urine test, and if they turn out to be positive, police state he could be held liable.
Following the accident, the San Pedro Traffic Department (SPTD) issued a statement via their social media outlet. It stated that they will now be strictly enforcing the use of motorcycle helmets. The SPTD reminds everyone that despite requests from the Mayor about wearing helmets and the carrying of small children on motorcycles, and the pressure from traffic wardens, people have been ignoring the advice. “As always, it takes an incident such as this to show people the reason for regulations and laws,” cited the release.
Head of the SPTD Chris Nuñez said that the enforcements will be done without exceptions. “All persons traveling on a motorcycle must wear a motorcycle helmet and no more than two persons would be allowed,” he said.
The SPTD and the Police Department ask everyone to be cautious when driving on the island, especially on the busier streets and when they have other passengers with them. They emphasized that the new regulations and strict enforcement that are coming up are all for the safety of everyone.