Ambergris Caye joined the many Belizeans countrywide in celebrating the Garifuna Settlement Day on the November 19th. This year’s celebrations were under the theme ‘Bungiu Lerebei Sun Katei Liden Nei Fureidei Luma Benefau Awanseruni’ (English: God strength of all things. Garifuna progress lies in education and hard work). One of the main activities in San Pedro Town was the revival of the Miss Garifuna Pageant, which took place on Wednesday, November 18th at the Honorable Louis Sylvester Sporting complex. The event was spearheaded by the local branch of the National Garifuna Council (NGC) with support of the Ministry of Tourism and Culture, and the San Pedro Town Council.

The 2015/2016 Miss Garifuna Pageant began shortly after 7PM with the singing of the National Anthem in Garifuna. Immediately after the National Anthem was sung, Pastor Clive Welch delivered the opening prayer. Hosts Timrose Augustin and Eiden Salazar Jr. had the crowd’s attention on high as they began the program for the evening’s event. President of the local NGC, Elroy Castillo welcomed everyone to the pageant which had been dormant for the past 18 years. He thanked all attendees for their presence and invited them join in the celebration and to enjoy the show. 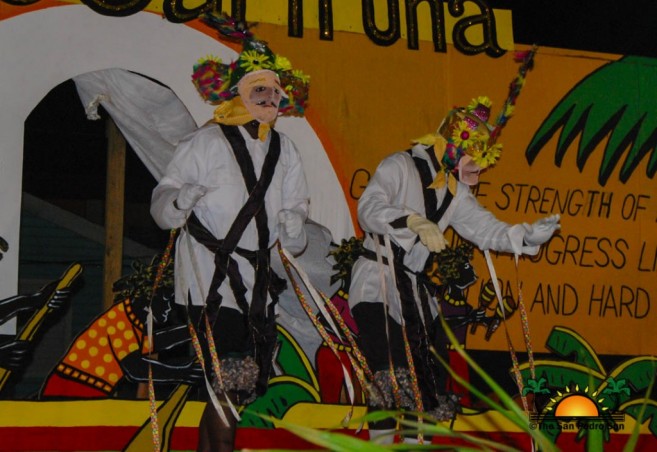 After the welcome address by Castillo, all four contestants vying for the Miss Garifuna Title performed an opening dance number with the first outfit of the evening. This was the teaser of the pageant, as the girls went quickly back stage to change for their second outfit. During the interlude, the audience was entertained by a dance performance by San Pedro’s Black and White Garifuna performers.
Next, each contestant came back to the stage performing the ‘Hunguhhunguh’ dance and punta. As they took center stage, they introduced themselves to the audience in Garifuna, sharing information about a particular Garifuna settlement that they each represented. Nicole Dunn, Sheila Montero, Zennia Nuñez, and Ashanti Martinez, all showed confidence, setting the bar high for a grand show.

One more time they slipped away to prepare for the following segment while entertainers once again took to the stage lighted the stage with colour and life performing the ‘Bow-le-le.’ 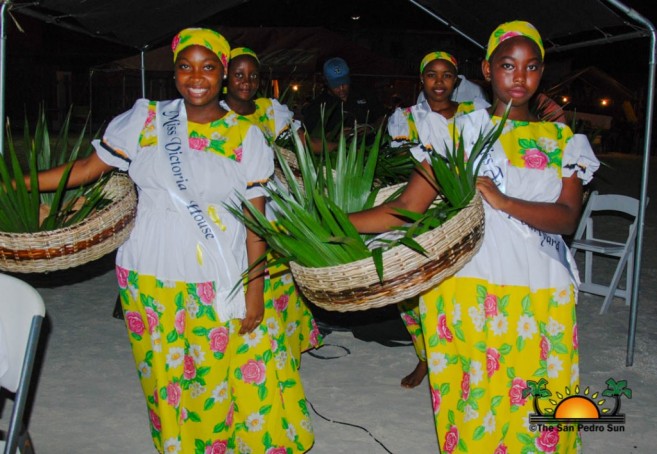 Afterwards, the girls came back on stage, one by one performing the ‘Chumba’ dance. Each candidate portrayed the different aspect of their ancestors’ livelihood. From fishing, farming to traditional house chores. In the Garifuna culture, the men would fish while the women would farm. One of the great values featured was the unity between the husband and wife. 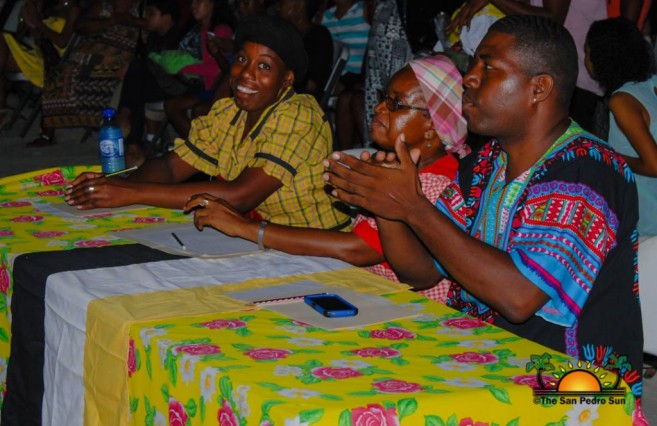 The girls slipped away one more time to prepare for the talent segment, so the musical interlude from the drums kicked in, while judges deliberated on the performances so far.

The talent presentation would add to the scores for the night, and there was talent to spare! Nicole portrayed the Garinagu lifestyle in a Chumba dance, while Sheila stepped on stage with a bucket and a scrubbing board, dancing Punta. When Ashanti was to step on stage, all eyes were glued on the stage waiting for her performance. However, to everyone’s surprise, she made her entrance through the audience with the ‘Two Foot Cow Dance.’ Closing the segment was Zennia with the ‘Hunguhungu’ dance feauring the Garinagu domestic lifestyle. The crowd showed their appreciation with wild applauses, cheering even more when Jankunu dancers took over the stage. They performed marvelously as the girls prepared for the final segment of the pageant. 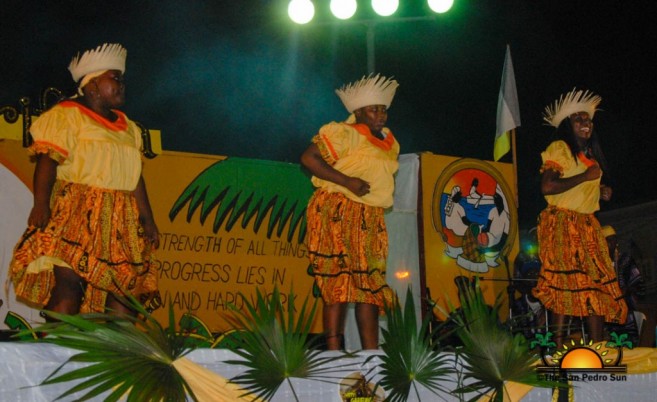 The challenge of the evening was definitely the question and answer segment. Contestants returned to the stage in their Parranda Evening Gown dancing a combination of ‘Hunguhungu and Punta.’ They each then drew a question, which was read in English and then they faced the audience as they answered it in Garifuna. After each answer, Augustin translated the answers for the Garifuna non-speaking attendees. The questions were based on topics such as cultural preservation, unity, self-esteem and even politics. The crowd kept cheering after each answer encouraging them to do their best on this last part of the event. When the segment was over, the audience was serenaded by Garifuna single Errol Roches, while judges tallied their votes.

Outgoing Miss Garifuna Tisane Martinez made her final appearance along with the girls as they once again danced to the quintessential drums. After thanking generous sponsors, Eiden and Timrose were ready to announce the results. The first runner-up title went to none other than Ashanti, who graciously accepted her role. The bearer of this title will take up the duties of the winner in the event that she cannot participate. 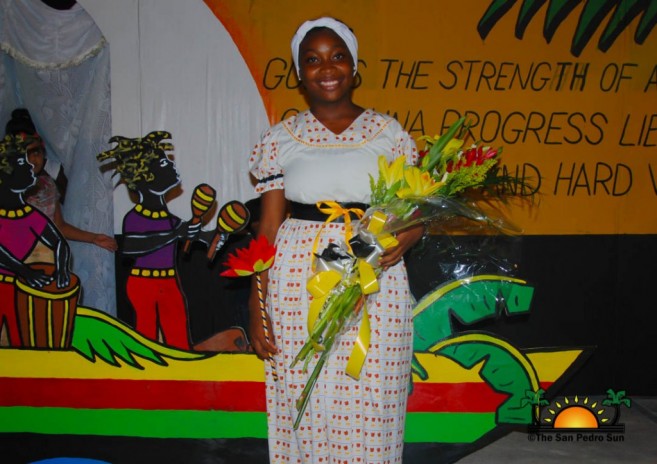 Finally to the sound of rolling drums, the winner was announced and the new Miss Garifuna 2015/2016 is, Sheila Montero! To the beat of Garifuna music, Sheila was sashed and presented with her bouquet. The musical performances entertained the crowd that stayed to bring in the 19th, until the wee hours of the morning. The official coronation was set to take the following day, Thursday, November 19th, during the official Garifuna Settlement Day celebrations. 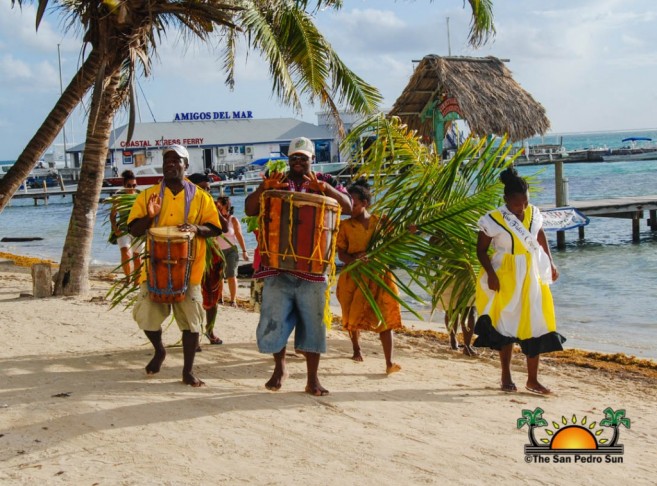 Early in the morning of the 19th the traditional ‘Yurumei’ took place, which is the re-enactment of the Garinagu’s arrival to the Southern Coast of Belize. As the boat docked on shore, the Garifuna drumming and singing could clearly be heard. They all marched along with the crowd that gathered to welcome to the San Pedro Roman Catholic Church for a mass of blessing. Shortly after, visitors and local residents that attended the services were invited for breakfast.

At 11:00AM, in a short ceremony, Sheila Montero was officially crowned as Miss Garifuna 2015/2016 by outgoing Miss Garifuna Tisane Martinez at the Honorable Louis Sylvester Sporting Complex. Sheila graciously accepted the crown as well as all the responsibilities that come with it. Montero will have the opportunity to participate next year in the National Garifuna Pageant competition where she will represent Ambergris Caye. After the coronation, attendees were invited to taste some of the best Garifuna dishes, such as Hudut and Sere.

The San Pedro Cultural Committee, The San Pedro Branch of NGC would like to thank the Ministry of Tourism and Culture, The San Pedro Town Council and all those businesses and individuals who contributed in making the celebration a success.