In their efforts to continue spreading awareness against oil exploration in Belize, the Belize Coalition to Save our Natural Heritage and Oceana in Belize inaugurated their ninth mural on Monday, March 13th. During a ceremony held on Laguna Drive, San Pedro Town saw the unveiling of the artwork depicting Belize’s rich marine ecosystem.

The initiative is part of a nationwide mural campaign, featuring scenes of the marine environment along the coast of Belize. The San Pedro mural depicts some of the marine wildlife and the richness of the barrier reef that lies in front of the island.

During a short ceremony held at Oasis del Caribe Apartments and Condominiums on Laguna Drive, Janelle Chanona, Vice President of Oceana in Belize spoke about the importance of such projects. “These paintings should be a reminder that we need to protect these rich natural resources, which support many livelihoods. San Pedro is the prime tourist destination in this country, and the barrier reef is vital for the local and national economy. We can’t stop the fight. These murals are another way of saying no to offshore oil exploration, and yes to the well-being of our natural resources.” 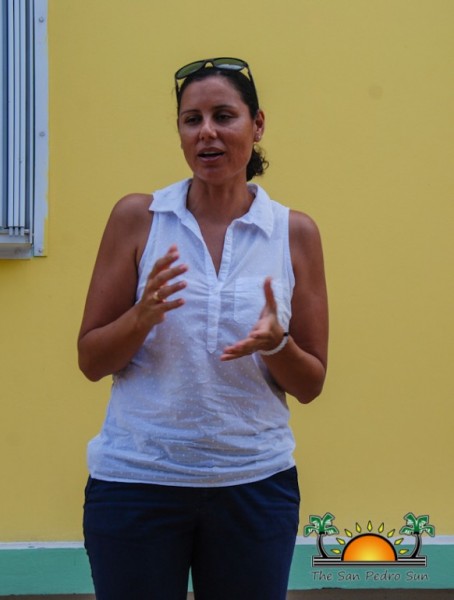 Also present at the event Valentino Caliz, the artist behind the creative art piece. He shared that he is an advocate of the preservation of our natural environment and was proud to be part of such a project. “I am happy to know that through my art, I can spread awareness to protect our marine ecosystem. I hope that when people look at the beautiful sea life and other beautiful things in the mural, they will join in the cause to save our natural heritage,” said Caliz.

Following the ceremony, the proprietors of Oasis del Caribe and Chanona officially cut the ribbon to ‘unveil’ the piece. The mural is the last one under the campaign and is the largest as well. The other murals are located across the country, including Corozal Town, Orange Walk Town, Benque Viejo del Carmen Town, Belmopan City, Belize City, Caye Caulker, Dangriga Town, and Punta Gorda Town.

Oceana in Belize and the Belize Coalition to Save our Natural Heritage would like to thank everyone who contributed in the successful mural campaign. Special thanks to the talented artists from each community, the volunteers, local authorities and members of the business sector for making it possible.