As part of a nationwide project to commemorate Belize’s 40th Independence anniversary, municipalities across the country have hired local artists to create patriotic murals. In San Pedro Town, a team of resident artists is working on a mural depicting the history of the island community, which evolved from a Maya settlement to the prime tourism destination of today.

The initiative is commissioned by the National Celebrations Commission and local authorities. In this case, the San Pedro Town Council. The island mural is painted on the external wall of the San Pedro High School and has drawn the attention of San Pedranos and visitors. Four local artists, Pablo Guerrero, Fred Trejo, Marcos Manzanero, and Elvin Sanchez are the painters.

The San Pedro Sun caught up with two of the artists, Trejo, and Guerrero. Trejo shared that painting has been part of his life and feels proud to be working on this project. He said to have worked on the mural sketch that brings back to life the beginnings of Ambergris Caye. “This is showing yesterday and today,” he said.

He explained that the mural portrays a Maya settlement living on the island in the Pre-Columbian time. Then came agriculture and the coconut and fishing industry. The fishing industry included marine products such as conch and lobster for export. The municipal dock was constructed, and public transportation was established between the island and the mainland (Belize City). Trejo said that the first boats, transporting people and cargo, would take almost 24 hours to travel to the mainland.

Fast forward, and the water taxi services improved their fleet with faster boats, and the tourism industry flourished, giving way to rapid development on the island. The pull ferry connecting to north Ambergris Caye was replaced by a modern structure that became the Sir Barry Bowen Bridge at the Boca del Rio area.

Another feature of the mural is the face of Palestine Habib Hajara, better known as ‘Paisano,’ watching over all the changes. Paisano was an island personality, and according to many, he will always be remembered as an icon of Ambergris Caye. Paisano was known by many islanders as the unofficial “Mayor” and described as a people’s person. One of his daily goals was to interact with as many people as possible and make everyone happy. He passed away in 2006 from a heart attack near his home.

Tourism changed Ambergris Caye. It is now Belize’s prime destination with large beach resorts and the fastest-growing municipality in the country. The sandy streets in downtown and part of north and south have been replaced with cement, teeming with different commercial outlets, a booming population, and modern services such as an airport. Gone is the once quaint village. 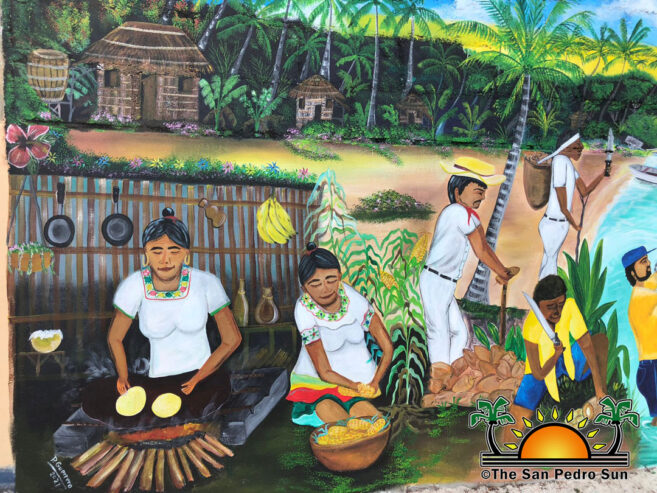 The mural is far from finished. The deadline for all murals countrywide to be done is September 13th, when they will be officially unveiled to the public.

Being a Good Pet Owner