« Older: Family of businesses gives $10K to SPHS Baseball team for their Panama trip
Newer: » Mayor says there will be public parking included in the Saca Chispas project


Tropic Air has announced that they are expanding their services both locally and abroad. In two separate press releases, Tropic Air revealed the newest flight services being offered. Locally, the airline will now offer flights to San Ignacio/Benque Viejo del Carmen while internationally, Tropic Air is introducing direct flights to Cancun, Mexico! 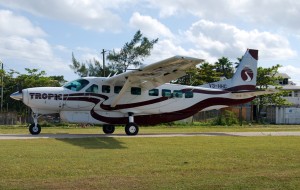 Starting December 10th, Tropic Air said that they will be offering daily non-stop passenger as well as cargo services from San Pedro and Belize City and will use the Maya Flats Airstrip, which is conveniently located between San Ignacio and Benque Viejo, and near to many of the major hotels in the area. The release further states that the expansion of the service in Belize “will allow for the growth of tourism in both regions, facilitating easy and quick transfers for visitors and for increased trade between Cayo and the rest of the country.”
Speaking on the expansion to the western most part of Belize, President of Tropic Air John Greif III said that “when we inaugurated San Pedro Sula earlier this year, we promised the people of Belize to add even more exciting destinations. With the support of our resort partners and the area residents, we now feel the time is right to add San Igancio to our growing network.”
In addition, the airline will be extending its international flights to Cancun City in the state of Quintana Roo, Mexico. The new non-stop international flight to Cancun will come into effect on November 12th. The release states that the service between the two countries “will not only serve to make travel to Mexico easier, but will allow for the expansion of trade and tourism between the two countries and an alternate route for Europeans wishing to enjoy all that Belize has to offer.”
In a statement John Grief II said that, “we promised that we would keep growing internationally. This fulfills that promise, and there is even more to come. Cancun is an integral part of the growth strategy for Tropic Air and as such we feel it important that we link the vibrant tourism market of Cancun with Belize.”
According to Tropic Air, the new services are a direct response to requests from its valued customers, and carries through on the airline’s stated commitment to the people of Belize. Tropic Air proudly operates a fleet of 12 aircraft, including the latest generation, G1000 “glass cockpit”, air conditioned Cessna Caravans, to 14 destinations in Belize, Honduras and Guatemala. With over 250 employees, the growing airline carried 250,000 passengers in 2011. For details as to schedule and price, customers may visit the company’s website at www.tropicair.com, or send an e-mail at [email protected], by phone at 226-2012 (San Pedro) or by contacting any of their offices countrywide.