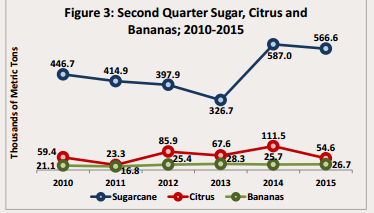 The primary sector of Belize, which includes the agriculture and fisheries industries, contributed to the decline in the second quarter. “The primary sector saw a 9.4% drop in total production for the period, as several of the major industries recorded downturns during the quarter. Sugarcane deliveries declined by 3.5%, or about 20 thousand metric tons. Citrus production, which had seen a significant upswing in the first quarter, dropped by about a half in the second quarter, from 112 metric tons in 2014 to 55 metric tons in 2015. Marine exports fell by almost 11% from 3.7 million pounds to 3.3 million pounds, signaling a decline in this industry for the quarter,” stated SIB. The only industry that saw an increase was the banana industry, which embarked on a replanting program last year and grew by 3.8%, recording an increase of just under a thousand metric tons for the second quarter. 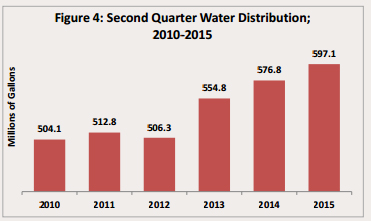 There was also a decline in the secondary sector, the manufacturing industries, during the second quarter. “Secondary activities declined by 10.8% during the second quarter of 2015, as most industries within this sector, with the exception of sugar, recorded decreased production. Despite the slight drop in sugarcane deliveries, sugar production grew by 18%, owing to an improvement in sugarcane quality. Consistent with the drop in citrus fruit deliveries, citrus concentrate production fell by almost half, from 2.4 million gallons in the second quarter of 2014 to 1.3 million gallons during the same three months of 2015. Crude petroleum extraction declined by 17%, while construction activities saw a decrease of almost 20%,” stated SIB. 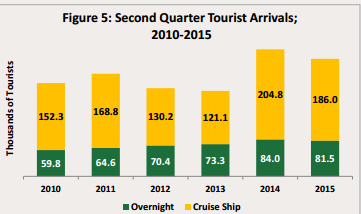 Industries in the secondary sector that saw an increase were beverage production. “Production of beverages rose by 6%, with increases in the output of both beer and soft drinks. Water distribution continued to increase, as access is expanded to more rural areas of the country, while electricity generation was virtually unchanged during the quarter.”
The only sector that rose in the second quarter of 2015 was the tertiary sector, which accounts for about a half of Belize’s total economy. “This sector grew by 2.9% in comparison to the second quarter of 2014. Wholesale and Retail activities grew moderately, by just over 1%, while government services increased by almost 11% during the period.”
Numbers that also fell were those of tourism industry which experienced a marginal decline of 0.2%, as fewer overnight tourists and cruise ship passengers visited Belize in comparison to the second quarter of 2014. Hotel room revenues also fell slightly, from $66 million in 2014 to $65 million in 2015.
Currently the national unemployment rate is at 10.1% as of April 2015.