One way to avoid receiving fake currency not worth the paper it’s printed on, is to “know your money”. The Central Bank of Belize has incorporated new security features into the Belize’s paper currency to protect Belizeans against counterfeits.
To familiarize the Belizean public with the new features, Mr. Barnaby Dicks of De La Rue International Ltd, the British firm which prints the Belize currency, hosted several “Know Your Money” public presentations at the Central Bank in Belize City on Wednesday and Thursday, May 3-4. 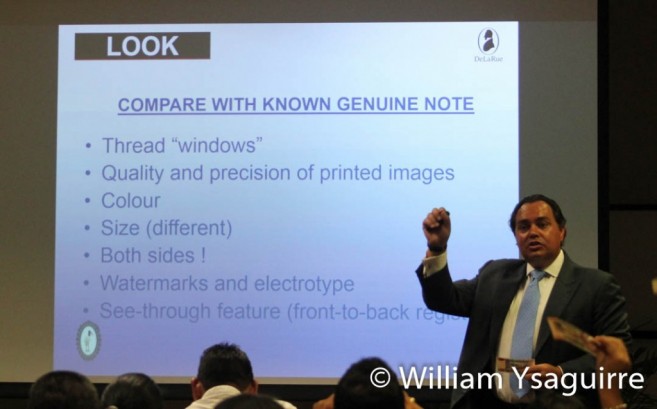 Dicks explained how the new features make it harder to counterfeit the Belizean monetary bills. Counterfeiters tend to target the higher denominations, because they represent a greater profit, each time a fake note is accepted as real. To make the Belize $100 bill even harder to fake, the toucan hologram on the bill now has an added feature, an intaglio overprint of a periwinkle flower. In the case of the $50 bill, the foil in the shape of an angel fish now has an intaglio overprint of the Kinich Ahua jade head. Intaglio is a printing process, whereby the printed image is given a raised feel, because of the engraved printing plate is pressed hard against the paper; and a thicker ink is used to produce an embossed image, that is almost in relief.
Belizean dollar bills also have a watermark in the paper, which is there from when the paper is made. The watermark is a jaguar for the $100 and $50 bills and it’s the image of the “Sleeping Giant” sculpture by George Gabb on the $20, $10, $5 and $2 bills. The watermark now also incorporates the value of the bill, spelled out in capital letters in electrotype: TEN for the $10 bill, FIFTY for the $50 bill, etc. The paper is the hardest thing for counterfeiters to duplicate, and the paper of real currency also has a thin metal security thread which is embedded in the paper when it is made, and the metal thread has the word: “BELIZE” printed on it, and then the same inverted, alternating in sequence on the thread, which is now slightly wider to make it more visible, from 1.4mm to 1.5mm.
Counterfeiters sometimes try to circumvent these features by getting genuine currency paper by bleaching low denomination currency i.e. the $2 bill and then printing a higher value note: a $20 on the paper. But a quick inspection by holding the note up to the light will reveal the real value, in the watermark, that should be printed on the paper.
The new generation of bubble-jet and color-toner laser printers can produce color prints that look a lot like real currency at a glance. But these printers use a dot matrix to create an image, so they will not reproduce the continuous lines of the images printed by an engraved plate for the intaglio print. On the real currency, the portrait of the Queen and all other images are printed by intaglio, which gives a raised feel to the print, which inkjet and laser-jets simply can’t duplicate.
The bills serial numbers printed on the top right corner of the bill also have digits gradually increasing in size; the same number is printed in a vertical column on the left hand side. There is also the see-through window with a different image for each denomination: the head of a tapir on the $20, a clock steeple on the $10, a sailing ship on the $5 and a Maya stella on the $2. Only half the image is printed on each side, the whole image is only visible by holding the bill up to the light. At De La Rue, the two sides of the bill are printed simultaneously so that they superimpose on each other perfectly to give the whole image. In the case of a counterfeit bill, the two sides will not have been printed simultaneously, and so the two halves won’t match perfectly: another sign of a fake. 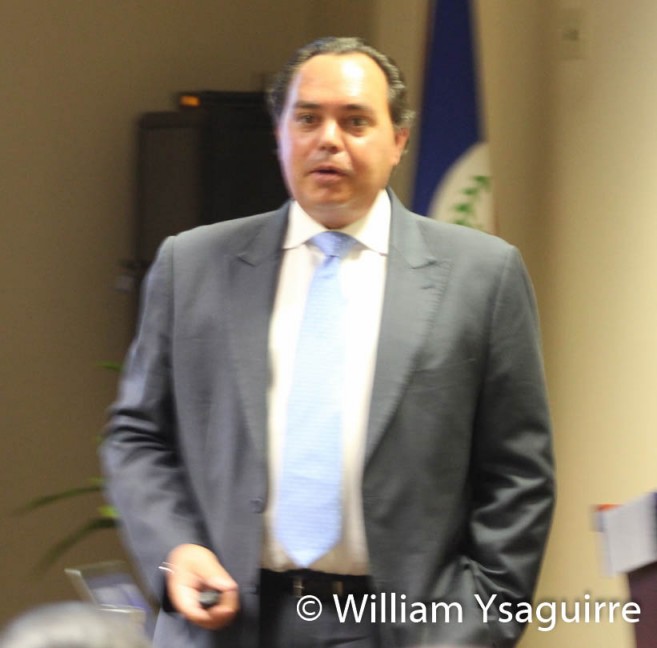 The real currency’s response to ultraviolet light is the quickest check for business handling large amounts of cash in poor light situations, such as a nightclub or bar/discotheque serving hundreds of customers at night. Paper made from wood fibre is usually reflective of UV light; it’ll fluoresce. The paper of real currency is made of cotton fibres, which is almost pure cellulose, and it is UV dark; except for those areas which have been treated to fluoresce with the dollar denomination as a number: 100, 50, 20, 10, etc. This is in the paper and impossible for counterfeiters to replicate.
As Dicks explained, the equipment which De La Rue International uses to produce Belize currency costs about £80 Million pound sterling, so that is how much counterfeiters would have to invest to begin to achieve a fake dollar bill that can pass rigorous inspection. Finally there is the micro-print on the back of the bill in the border immediately below Central Bank of Belize, there are minute letters almost invisible to the naked eye, but easily seen with a magnifier: Central Bank of Belize Dollar. A bubble-jet or laser-jet printer simply can’t print those precisely.
The first check is the feel of the real note, Dicks advised; the intaglio printing gives that raised, embossed feel to the printed bill. If in doubt, compare the suspect bill with a currency note you know to be genuine, such as one you just got from the bank! The next quick checks are to hold up to the light to see the watermark, the electrotype value, the security thread and the see-through window.
For more information, please visit the Central Bank website at www.centralbank.org.bz/currency/security-features
In the case of United States currency often brought by visitors, and which is in large circulation in Belize and often targeted by counterfeiters, check: www.secretservice.gov/know_your_money.shtml