Authorities advise to look out for counterfeit currency


Recently there has been a rise in incidents involving Belizean counterfeit currency, leaving a number of establishments suffering the consequences of the fake money. As such, the general public is asked to familiarize themselves with the security features of Belize’s paper currency, as set by the Central Bank of Belize.
According to Central Bank of Belize, the Belizean monetary bills contain new features that make it harder to counterfeit. Most of the fraudulent paper currency targets the higher denominations, due to the fact that they represent a greater profit. Currently, the denominations being affected are the $50 and $100 bills. 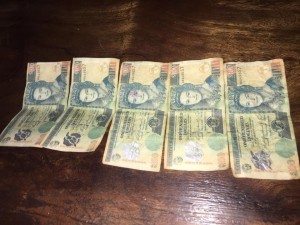 The new feature to look for in the $100 bill is an addition of an intaglio overprint of a periwinkle flower over the toucan hologram located on the left centre corner of the bill. In the case of the $50 bill, the foil in the shape of an angel fish now has an intaglio overprint of the Kinich Ahau jade head. Other features to look for are the watermark images. The watermark is there from when the paper is made and it cannot be faked. The $100 and $50 bills feature a watermark of a jaguar, while the$20, $10, $5, and $2 bills feature the image of the ‘Sleeping Giant.’
The watermark also incorporates the value of the bill, spelled out in capital letters in electrotype. Another feature to look for when detecting a counterfeit bill is the type of paper. The paper for real currency has a thin metal security thread which is embedded in the paper when it is made. This metal thread has the word ‘BELIZE’ printed on it. A few counterfeiters sometimes try to circumvent these features by getting genuine currency paper. They bleach low denomination currency, such as $2 bill and then print a higher value note like $50 on the paper. But a quick inspection by holding the note up to the light will reveal the real value in the watermark printed on the paper.
In the real currency, two sides of the bill are printed simultaneously so that they superimpose on each other perfectly to give the whole image. In the case of counterfeit bill, the two sides will not have been printed simultaneously, and so the two halves will not match. Also it is important to know that real currency responds to ultraviolet light, (UV), which is the quickest way for businesses handling large amounts of cash in poor light situations. This applies for nightclubs serving hundreds of customers at the same time. Real currency’s paper is made of cotton fibres, which is almost pure cellulose, and it is UV dark; except for those areas which have been treated to fluoresce with the dollar denomination as a number: 100, 50, 20, 10, etc. It is impossible for counterfeiters to replicate these features.
For more information, please visit the Central Bank website at www.centralbank.org.bz/currency/security-features. In the case of United States currency often brought by visitors, and which is in large circulation in Belize and often targeted by counterfeiters, check: www.secretservice.gov/know_your_money.shtml

COVID-19 pandemic continues to take its toll as unemployment soars