Multi-million-dollar cruise terminal to be built near Belize City


Over a decade of back and forth between the Government of Belize and developer Michael Feinstein, regarding a multi-million dollar cruise development off the coast of Belize City, ended on Friday, August 25th when both parties finally signed an investment agreement. The project calls for a brand new cruise port under Stake Bank Enterprises Limited, belonging to Feinstein. It will see the construction of what is being described as a world-class cruise ship docking facility on Stake Bank Caye, located about four nautical miles southeast of the city.
Present at the signing was Minister of State with responsibility for Investment, Trade and Commerce Honourable Tracy Taegar-Panton, United Democratic Party Senator Mike Peyrefitte, Deputy Prime Minister, Honourable Patrick Faber and Feinstein. 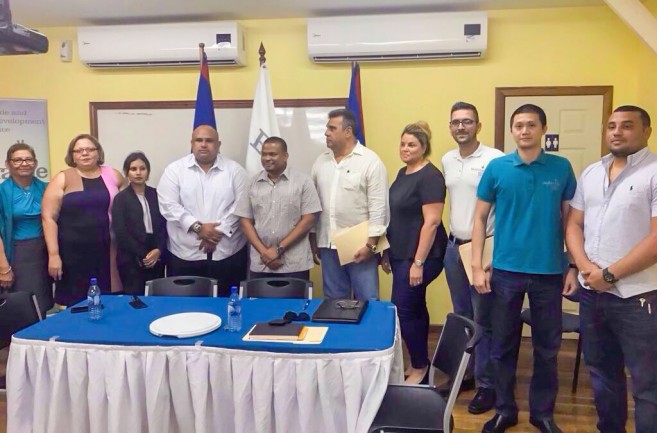 The mega-project was originally announced in 2006, and was approved by Parliament in 2014, but the current administration and Feinstein could never agree on other details, and the project was in limbo. Recently, Cabinet’s Investment Committee decided to give it another opportunity by dealing with the factor that was impeding any further development. According to Peyrefitte, an exclusive clause is what was delaying any developments of the project. “This is a definitive agreement, which outlines the agreement between the government and the developer. Speaking of the exclusivity, a previous agreement gave Stake Bank entire exclusivity; this new agreement asks the developer to amend the act to take out that exclusivity,” said Peyrefitte.
During the signing ceremony, Feinstein stated that the project will have a cost of $50 million dollars, and will take around 18 months to complete once construction begins. “It will be two docks to accommodate four ships,” said Feinstein. “It’s a big development with an approximate area of 17 acres that will also include a marina with a few stations.” 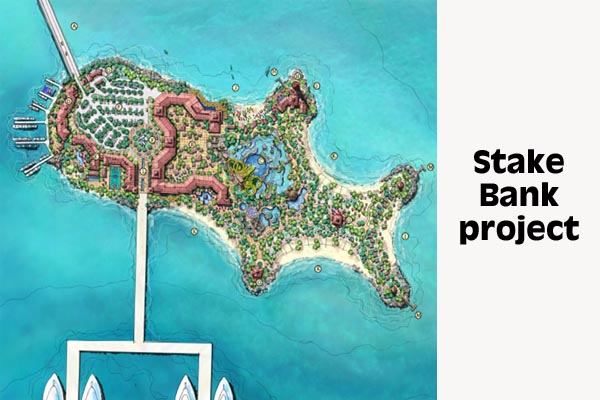 The project is expected to provide hundreds of jobs, and Feinstein added that larger ships are already bypassing the country, thus, this large docking facility is very important. “We are securing this industry once and for all,” he said. Claiming that he wants to uplift the Belizean business people, Feinstein said that when he was an investor at Fort Street Tourism Village in Belize City, 95% of the businesses were run by Belizeans. Today, it is the opposite. He said over 90% of the businesses at Stake Bank will be run by Belizeans. “I have never seen a problem with giving Belizeans the opportunity. It worked with the tourism village. I don’t see why it wouldn’t continue working,” he said. Feinstein added that it’s been a long time waiting for the project to start, and he is now satisfied how the government is handling the situation and working along with him.
In a press release issued on Friday, August 25th, the government gave a few more details about the project. According to the note, Stake Bank will also include an 80-room luxury guesthouse with supporting amenities, and a theme park with water rides, roller coaster and more. No mention of captive wildlife was mentioned as part of the design plans. This differs from Norwegian Cruise Line’s Harvest Caye’s cruise port in southern Belize, where native Belizean wildlife is on display for the enjoyment of cruise passengers.
Now that Stake Bank has the green light, the next hurdle is to secure funds for its completion. According to Feinstein, the financing for such a mega-construction is already being discussed. Three different cruise lines have already showed interest, and local banks in the country appear to be on board with the project, said Feinstein. “They have all said yes, and they would form a syndicate of 3-4 banks to take care of that. So, I don’t see financing as an issue,” he said. “We have many options, including foreign investment.” It was also announced that Stake Bank is looking at probably offering 40-45% shares to cruise lines and local investors. However, Feinstein will maintain about 51% of the shares in the investment.
Minister Panton spoke about the project, saying she sees it as an opportunity to flesh out the obligations of the government as it relates to the concession and fiscal arrangements. “It will allow this development to happen as we can see the obligations of the developer and the timeframe in which the development will be incentivized,” she said.
For his part, Deputy Faber supported the project saying that cruise tourism is very important to the country’s economy. He also showed satisfaction to know that the current businesses at the Fort Street Tourism Village will not be affected by the new development. “Feinstein has assured us that they are able to work with the existing players. That was of concern for us – what was going to happen with folks at the tourism village?” said Faber. “We are happy that we are able to approve this development, as we believe that cruise tourism will continue to play a major role in Belize’s development.” The cruise port will also serve as an entry point for the thousands of cruise passengers, and the tax collected from the tourists is expected to have a positive impact on the city.
Faber stated that there should be no concerns from environmental entities. The project’s plans changed dramatically as per recommendations by the Department of Environment (DOE). The Environmental Impact Assessment prepared at that time, was also revamped to address environmental concerns. At the early stage of the development, DOE declared the project environmentally unfriendly, with the possibility of negative impacts on the environment. One of their main concerns was a proposed four-mile causeway, which would connect Stake Bank and Belize City. Such proposal has since been removed from the project’s constructions plans.
The project is expected to undergo its construction after the closing of the hurricane season later this year. Once the development is completed by mid-2019, annual revenue of about $700 million is expected to be added to the country’s economy. The port will be opened to serve ships of all cruise lines currently sailing the Caribbean region.

The cost of chicken increases after feed prices goes up