An American couple, 62-year-old Scott Morrison and his 70-year-old wife Marilyn Bird arrived on Ambergris Caye for their anticipated second visit on December 29, 2017, for a two-week vacation. The American couple had planned many fun activities while in Belize, including the completion of Bird’s scuba diving certification. But such plans were undone when Bird suffered a terrible accident on the morning of Tuesday, January 2nd when she was boarding a San Pedro Belize Express (SPBE) vessel. While boarding Bird fell inside the boat, rolling down the steps and into the cargo compartment whose lid was open. During the fall she suffered a large gash on her leg and was transported to the Dr. Otto Rodriguez San Pedro Policlinic II where she received 15 stitches. Following the incident, the couple expressed their disappointment with the poor response they allege they received by the water taxi company. According to them, they did not take adequate accountability for her accident which in large was due to their negligence of not having turned on the lights inside the vessel and having the cargo compartment open at the time of boarding. As a result of her injury, the couple was forced to return to the United States, on Friday, January 5th, a week earlier than their scheduled departure time. 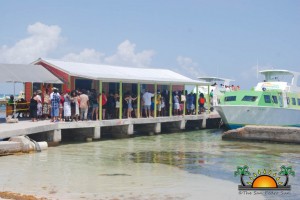 According to Morrison, that morning they were scheduled to leave on the 6AM boat to Belize City from where they would be taking a tour to one of the Maya temples on the mainland. Morrison said that they were excited and were looking forward to a wonderful day filled with adventure. He remembers that when it was time to board the boat, his wife went ahead and one of the porters greeted her at the entrance of the boat. A few seconds after, Bird was falling down inside the boat, rolling, banging herself and ending up inside the cargo compartment. Apparently, the cargo lid was open at the time of her fall.
Morrison said he immediately came to her aid and asked why the cargo lid was opened. He also noticed that the lights were turned off and the inside of the boat was a bit dark. Morrison noted that the crew were somewhat startled and did not offer any assistance. “It took a few minutes to unfold my wife and got her out, she had been badly injured,” said Morrison. Besides the bruises she experienced during the fall, she suffered a deep cut on her shin all the way to the bone.
The trip to Belize City was canceled and with the assistance from the management of the SPBE San Pedro Branch, Bird was taken to the Polyclinic. Morrison said the management apologized for the incident and offered to take care of medical expenses. But after Bird was treated with 15 stitches, the Polyclinic did not issue a bill. In his frustration, Morrison attempted to make a police report for the apparent negligence of the SPBE. “The police would not take a report. They simply told me that it was not a crime,” Morrison told The Sun.
The couple felt that their vacation was taken away from them and due to Bird’s incapacitation they made plans to return home earlier than expected. The couple indicated that they sought to see if SPBE would accept some liability for their alleged negligence, but according to Bird they simply turned them down. “They say they can’t do anything and don’t understand why I can’t take the boat back to the mainland,” said Bird. “After speaking with the managerial personnel here on the island, they admitted that they were at fault and that all cargo lids should be shut before people enter the boat,” said Bird. “It was the management themselves who took money out of their pockets to fly us over to the international airport because the company itself refused to help in any way.”
The San Pedro Sun contacted the SPBE branch on the island regarding the incident. They briefly confirmed that arrangements had been made for both Morrison and Bird to fly to the international airport on the day of their departure. The managerial personnel also stated that after rendering transportation to the Polyclinic and covering their local flights there was nothing else they could do.
Morrison and his wife were to return home on Wednesday, January 10th, after their two-week holiday. Bird claimed that to change the return date of the plane tickets they had to pay an additional $900 and will lose a week vacation which had already been paid. She is disappointed and for the time being, she is thinking of never returning to Ambergris Caye. “We fell in love with the island and its people. That’s why we came back for a second time, but now after this incident, I am not sure if I ever want to come back,” Bird ended.

Rider’s fee increase to be implemented on all domestic flights