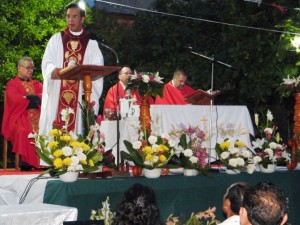 San Pedro Day (Dia de San Pedro) was celebrated in the past week in grandeur, with both religious and festive activities. On Wednesday June 29th, 2011, The San Pedro Roman Catholic Church held an open air mass at the Friendship Park on Barrier Reef Drive. The special mass held in honor of the patron saint, Saint Peter. With just over two hundred persons in attendance, the mass was well received.

One highlight of the mass was the announcement by the Church’s resident Priest, Father Daniel Nuñez that he would be relocated to Arizona. Gifts and speeches of appreciation were offered by attendees. Following the mass, there was a procession through the main streets of the Island, followed by a small banquet.

The festivities continued with the official opening of the Dia de San Pedro celebration on Friday night July 1st. The highlight of the evening was the third annual karaoke competition. This year, the competition was fierce, but only one could walk away with the top honors, and that singer was Velma Melendez. Her melodious voice brought Paquita la Del Barrio to life in San Pedro, and the judges voted her as their favorite.

Saturday night, the Saca Chispas field was over crowded with locals and visitors alike, gathered to enjoy the many dance and cultural presentations onstage. Entertainment was provided by the San Pedro Dance Company, followed by a number of breath taking cultural performances by the Belize Dance National Dance Company. With the performance of other local artists, the night’s highlight was the lighted skies as fireworks were shot up into the night’s skies, illuminating with colorful display of fire words. Following the spectacular display, the crowed danced the night away to the music of the Super Furia Band.

Sunday night saw performances by the Danza de Ballet Folklorico de Q. Roo and other performances. Mechanical rides, food and drinks were in abundance for all to enjoy.