The Belize Lobster Season 2012 has officially opened and already fishermen are bringing in their catch of the day. Fishermen at both the beach side of the island and at El Embarcadero (docking station) are excited since the first day yielded an excellent catch. Since 4AM this morning, fishermen went out to sea, some to check their traps and sheds, while others simply decided to search the reef for the delicious crustacean. 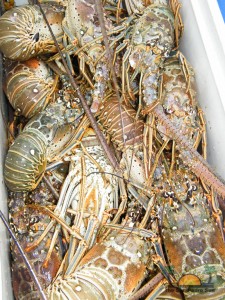 At the beach side, the Big Daddy’s boat came in shortly before 11AM with over 120 pounds of lobster tail, all ordered out by various businesses who will no doubt offer lobster on the menu starting today. “It was a good day for us,” said one of the five fishermen on board Big Daddy’s boat who proudly stood next to their catch.

For well known islander, Elito Arceo, he could not have asked for a better catch. He was happy with the turn out after returning from sea shortly after 11AM with a cooler filled with lobster. He said that he will share the catch between family members and friends. 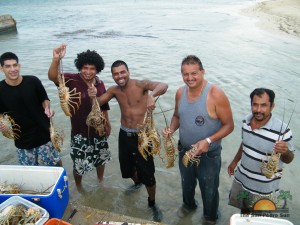 Lobster season in Belize runs from June 15th to midnight on the 14th of February, 2013. The lobster tail must weigh over four ounces or the cape length/carapace must exceed three inches for it to be legal for consumption. The carapace of a lobster is referred to the part of the crustacean where the head connects to the tail all the way to the center of the pair of small spines located between the two eyes. The Caribbean Spiny Lobster scientifically known as Panulirus Argus and locally referred to as crawfish (crayfish) is the only type of lobster in Belize whose consumption is regulated.

The fishermen say that a pound of lobster is selling at $20.