The Football Federation of Belize’s Inter District Football competition is underway and each district is in the process of choosing representatives. As such the San Pedro Football Club, playing under the Belize District Football Association, has started official competition to choose two teams which will travel to Belize to compete against other champions from the Belize District to determine who will represent the District in the Inter-District at the national level.
The San Pedro competition started on Sunday, October 14th and saw eight energetic, enthusiastic teams signing up for the competition. Present at each games are officials from the FFB Inter District competition as well as the president of the Belize District Football Association.
Competing are: Los Catrachos, San Pedro Veterans, Club United FC, Naivis FC, Club Belizean Shores, DFC Passy, Suga Boyz Juventus and Lebanese FC. The teams will see seven weeks of competition after which the two top teams will be chosen to move onto the Belize District competition.
On the 14th, Club United FC tied with Naivis FC in a score of 2-2. Game two saw Belizean Shores winning over DFC in a game of 4-2 while Suga Boyz Juventus saw a challenging game against Lebanese FC, a game at the end of which neither team managed a goal. This game ended in a nil – nil game. 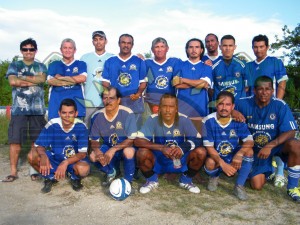 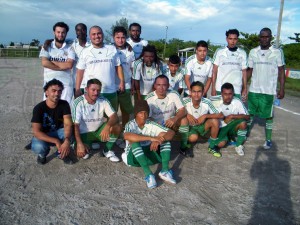 Speaking to The San Pedro Sun, Chairperson for the Belize District Football Association, Mr. Sanja Pitts explained, “This is the Belize District / San Pedro first division tournament which is being played under the FFB regulations. The winner of this tournament will be representing the San Pedro area in the district finals which will be comprised of four teams. This tournament in itself is different from other tournaments organized here on the island because you can actually go somewhere now. At first you just used to play in San Pedro and when that season is done, it’s over. Now with this competition; your efforts are rewarded. So you win here, you advance to the district finals. You win the district finals, you represent the district at the champion of champions for the Inter District. You win the Inter District and then you go to the international champions of champions that the CONCACAF (Confederation of North, Central American and Caribbean Association Football) will be having.”

With the regulations and organizers promoting team work, responsibility, sportsmanship and discipline; all teams are expected to adhere to certain rules. Including: all teams are asked to be at the field at least one hour prior to scheduled game time. The first game of the day is allotted a 15 minute break. Each half game runs for 45 minutes with a 15 minute half time. A roster of all players must be handed to officials no less than 15 minutes prior to start time of game, among other rules.
The schedule for this weekend is as follows:

The games will be played for seven weeks on Saturdays and Sundays at the Ambergris Stadium. Football fans are invited to come out and cheer on your favorite team.