United FC are champions of the local FFB competition


United FC is the official San Pedro champion of the Football Federation league competition. Held on Sunday January 13th at the Ambergris Stadium, the final battle saw United FC facing Los Catrachos in a battle for major bragging rights and of course, trophies and the title of champions. 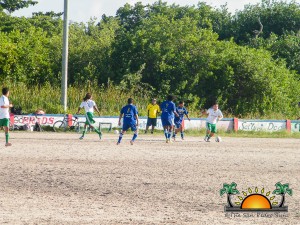 The finals were held in a ‘Home and Away’ competition format. In the first game, United FC took the win in a game of 1 – 0 on Sunday January 6th. It seemed that Los Catrachos were not going to let that happen again, as they began the second (and final) game in a most impressive manner, slamming three goals in the first half. United FC was in serious danger of losing, as Los Catrachos only needed 2 goals to take the championship. However, after half-time, there seemed to be a renewed vigor in the United FC team and they were ready for the somewhat over-confident Catrachos.

It seemed that confidence opened the second half with two impressive, successive goals from United FC. By minute 90, Los Catrachos had taken the win with the final score of 3-2. But, the championship wasn’t quite won yet. Since the first game was won by United FC with a score of 1-0, Los Catrachos needed to win by at least one goal more – and since the final score in the second game was 3-2, the overall goal count for both games was 3-3 – a tie!

Overtime was called with two new 15-minute halves, and United FC took the lead, scoring two more goals. Los Catrachos played aggressively but try as they might, were unable to recover their initial momentum. In the end, United FC had their big comeback, taking the championship right out of the hands of Los Catrachos. 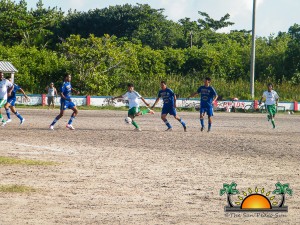 When speaking of their win, manager and player of United FC, Elvis Budna told The San Pedro Sun, “I would like to give thanks to all my players who were always there playing heart and soul. I am very proud of them for bringing this team from game one to game twelve without losing a single match throughout the entire competition. [The team was undefeated with two draws and ten wins.] I’d also like to give special thanks to the coach, Abner Rivera, for his hard work and dedication to our team. Many thanks to Mr. Cholo for his continuous support of our team, as well as to everyone who contributed to and supported our team: Abner Rivera, Javier Calderon, and Mike and of course our many fans.”

The organizers would like to thank the following sponsors of the tournament: The San Pedro Town Council, Captain Shark’s, Southwind Properties, My Secret Deli, Waruguma, Spindrift Hotel, The San Pedro Sun, The Reef Radio, San Pedro Belize Express, Victoria House and Mata Chica. Fuljencio “Fully” Hoare, organizer of the tournament hopes to be able to present trophies and medals in the upcoming weeks, during an all-star competition to be held at the Ambergris Stadium. The San Pedro Sun will be sure to keep you informed as the date draws near. Congratulations to United FC for their spectacular season and championship!

For more information on upcoming football events feel free to contact Fully at 604-8015.