The San Pedro Cultural Committee (SPCC) in collaboration with the National Garifuna Council (NGC) held several activities ending with the 19th of November celebration commemorating National Garifuna Settlement Day in Belize. National Garifuna Settlement Day is a day set aside to remember the date when the Garinagu came to permanently settle in Belize with the first arrivals in 1803 and then later, in full force on the 19th of November 1932 led by Alejo Beni.
The mixture of Caribs and shipwrecked African slaves gave birth to a new group called Garinagu who migrated from St Vincent to Honduras, Guatemala and Belize. They brought with them their ground crops, cane, coconut, plantains as well as their beliefs. For years, since their arrival to the southern coastline of Belize, the Garingu have used the month of November to highlight the struggle that their ancestors had to overcome for their survival.
During the course of the weekend of the 16th to the 19th of November, the SPCC introduced some of the core activities that are a part of the Garifuna culture. The two main events that were added to the annual celebration on the island were the house to house Jankunu (pronounced as John Canoe) dancers as well as a full cultural night on the eve of the 19th of November highlighting the Charikanari dance.

The Jankunu dance is comprised of male dancers dressed in a special dress-like outfit with colorful hanging ribbons and a gorgeous headpiece made of multi-colored feathers with a small mirror to the front. A pink mask conceals the identity of the dancer, and a knee piece made of small dangling sea shells and black or white socks completes the ensemble. The Jankunu king however, does not wear the dress-like outfit but instead uses a black pants and white long sleeve shirt with a black and white ribbon across the front. The dancers face the drummers who then beat the drums in accordance to the movement of the dancers. The dance mimics the English men who drove the Garinagu off the shores of Belize. 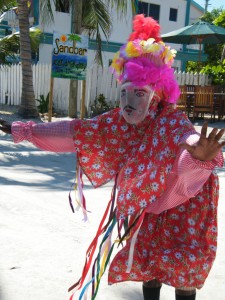 Charikanari and the hunta-man move to the lilting tune of the harmonica, accompanying by the resounding, measured rhythmic boom of the Garifuna bass drum (segundo) and the lead Garifuna drum (primero). The objective is to hunt and try kill the charikanari. As usual, the antics captured the attention and imagination of a large audience at the Central Park, and at the end of the dance the performers were given a standing ovation.

Then, on the morning of the 19th of November, two boats filled with Garinagu, drummed their way from the Central Park to the Boca del Rio Park and back to the Central Park as they reenacted the arrival to Belize. Following the reenactment (Yurumie) there was a special mass at the San Pedro Roman Catholic Church. The official ceremony then followed at midday at the Central Park.

Mayor of San Pedro Town Daniel Guerrero and Minister of Tourism Manuel Heredia Jr. both addressed the Garinagu and both committed to continue supporting the causes of the Garifuna culture to make the celebration bigger and better next year. For her part, Guest Speaker, teacher Julia Martinez took the opportunity to highlight the many obstacles that still hinders the progress of the Garifuna culture. She 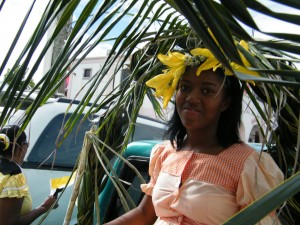 explained that their ancestors were successful despite the challenges because of unity, something that is not happening among the modern day Garinagu. Following the official ceremony, a small parade took place along the principal streets of San Pedro Town.

Since 1943 November 19th has been a public holiday in the Stan Creek and Toledo districts called Garifuna Settlement Day. Since 1977, November 19th has been a country wide public holiday. This year, it was celebrated under the theme “Wawansera Memeba Lau Lubafu Bungui Hama Ahari – We keep going forward with the Power of God and the Ancestors.” The SPCC committee takes the opportunity to thank all those who played a vital role in making the National Garifuna Settlement Day activities a success.