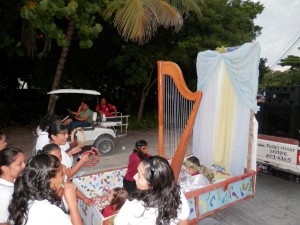 The Biblesta, (a combination of the words Bible and Fiesta) has been a mainstay in Humboldt, Kansas USA the first Saturday in October, every year since 1957. The main attraction of the event is a bible parade with bands, marching and equestrian units and featured floats depicting biblical events. The floats begin the parade in the book of Genesis, and stay in biblical order through the book of Revelations.

While the churches from San Pedro have not adopted the entire event, what will certainly become a mainstay on our island community will be the annual Bible Parade and the presentations that follow at Central Park. This year’s parade took place on Saturday, December 1st and saw the participation of nine congregations.

The parade took worshippers from the starting point at Banyan Bay, northbound on Coconut drive, onto back street (Almond Street), through the old football field and onto Angel Coral St. to Caribeña St. then east to Pescador Drive, south on Pescador Drive to Tarpon Street, east on Tarpon Street to Barrier Reef Drive then north on Barrier Reef Drive, culminating at the Central Park. 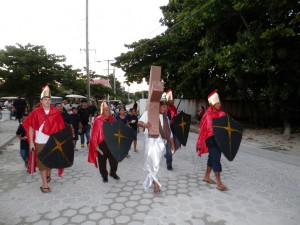 This marks the second year that the parade has been taking place and according to Alex Tzib, secretary of the Evangelical Alliance, it was a huge success. The alliance, made up of five pastors and seven established churches, were instrumental in the very visible success of this year’s parade. The alliance was formed some four months ago and includes Pastor Marvin Gomez, President of the Shalom Church; Pastor Ian Zaldivar of the Living Word Church; Alex Tzib of the Pentecostal Emmanuel church, Pastor Francisco Flores of the Asamblea de Dios; Pastor Ismael Rodriguez and Pastor Clive Welch of Lighthouse Christian Radio.

According to Tzib, the parade is not so much about religious denomination but rather, “Exalting the word of God and praising him for the Word he has given to us.” This is the second year that the parade is taking place here on the island. According to Tzib, the celebration is a common one within Central American countries, held on the first Saturday in August, the month set aside as “the month of the bible”. In San Pedro however, due to planning issues, the parade was held on December 1st. Unfortunately the parade conflicted with other community events that had been scheduled well in advance. According to Tzib, the team is in the process of planning next year’s event well in advance to assure that they

choose a date that will not conflict with other community activities, and will then stick to that date each year.

The theme for this year’s parade was “Jesus – The Living Word”. The parade included floats depicting Noah’s Ark, the great bible, the harp symbolizing praise and worship and countless placards with scriptures and words proclaiming the word of God. Following the parade, the various churches that participated, presented various choreographed dances and the crowd was entertained by three church bands. The event continued well into the night with all present indulging in unity with praise and worship. Special guest speaker for the event was Pastor Juan Jose of Mexico City, Mexico.
The organizers of this year’s bible parade would like to take this opportunity to thank the San Pedro Town Council, the San Pedro RC School, all the churches that participated and the community of San Pedro for extending a welcoming hand to this new activity on the island.