Two members of the Blues Dogs band teamed up with island-based musicians for an afternoon of blues on the beach at Estel’s Dine by the Sea. The event was organized in an effort to raise funds for the Holy Cross Anglican Primary School, the only public school in the San Mateo area of San Pedro Town. Kent Obermann and Chris Kay of Blues Dogs’ band were vacationing on Ambergris Caye when they decided to donate their time and talent for a worthy cause.

Speaking to The San Pedro Sun, Obermann explained that after meeting with Rendezvous’ Glen Schwendinger, they had the same idea: a charity performance. “We started talking about life, music and other things and the next thing you know, we are doing this fundraiser. It was two of us from our band, and all the rest are local musicians. Glen put together an unbelievable fundraiser. We have a lot and it is our opportunity to give back. We are on vacation and this is a skill that we have and there is no reason not to use it and have fun while doing something good,” said Obermann. 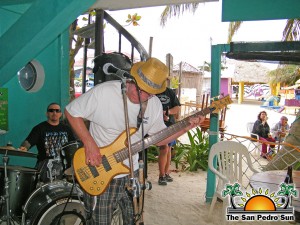 As such a blues jam session was held on the afternoon of Friday, January 18th and in a matter of about three hours, $2,350BZ was collected. But the fundraiser was not over, as the Blues Dogs fan club decided to chip in and donated another $6,500 bringing the amount to $8,850. Just as the total figures were being tabulated, another pledge came in from a philanthropic association of volunteer donors of Microsoft Corporation, who decided to make a contribution and doubled the figure to bring the grand total to a little over $17,700. 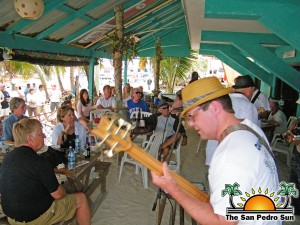 Schwendinger expressed his gratitude and happiness at the success of the event. Once the pledges have been collected, the total amount will go a long way towards helping out Holy Cross Anglican School. Obermann, who has been to Belize on several occasions, hopes to come back and do a similar charity event in an effort to help the less fortunate on the island. 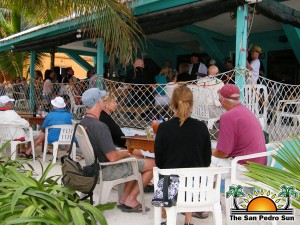