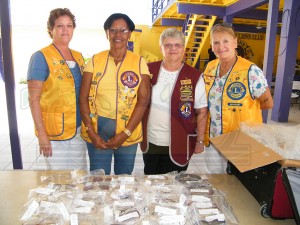 The San Pedro Lions Club received some 700 pairs of refurbished prescription glasses that will be distributed around the country to those most in need. The donation comes through the efforts of Lion Louise Kerensted. Kerensted is a lion member and former President of the Stonewall District Lions Club in Stonewall, Manitoba, Canada. She also sits on the board of directors for the Manitoba Eye Bank. Who would have thought at a Friday night of barbeque and bingo at the Lion’s Den would result in this rather sizeable donation.

Kerensted spoke to The San Pedro Sun of how the donation came about. “I brought my family to Belize last year and we came to the Lion’s Den Barbeque and Bingo on a Friday Night. Bonnie and I and some of the other Lions got to talking and they said that this was one thing that this club did. So, when I got home as I’m a member of the board of directors of the Manitoba Eye Bank and I know that this was part of what we did, I figured why not. All the clubs collect these glasses and then they’re repaired and then the prescriptions are put on them and they go all over the world, and so I thought, well, I’m coming back to Belize, wouldn’t it be wonderful if I could bring glasses? And so I emailed down here and got an idea of what types of glasses were most required and sent that information to our recycling center – and I asked for anywhere around 700 pairs and that’s what they gave me, 700 pairs.”

The glasses included everything from bifocals, reading glasses, single prescriptions glasses and sunglasses with prescription. According to the Secretary of the San Pedro Lions, Bonnie Musbach, the glasses will be distributed throughout the country with 100 pairs being given to each zone president. Further to this, Musbach will be trained through the Belize Council for the Visually Impaired BCVI to administer primary vision tests. With this skill, she hopes to travel to the southern districts along with President Murlene Spain and past president Melanie Paz where they will be issuing tests and glasses to those individuals in need. The team plans on hitting areas such as Punta Gorda, Placencia, Seine Bight and Dangriga among other places in the south. President Spain is very excited for the donation and assures Kerensted that the glasses will certainly reach the individuals that need them the most.

The San Pedro Lions Club hosts eye doctors from BCVI the first Wednesday of each month. The doctors will be back on the island on March 6th and 7th when they will be offering free eye exams and services.