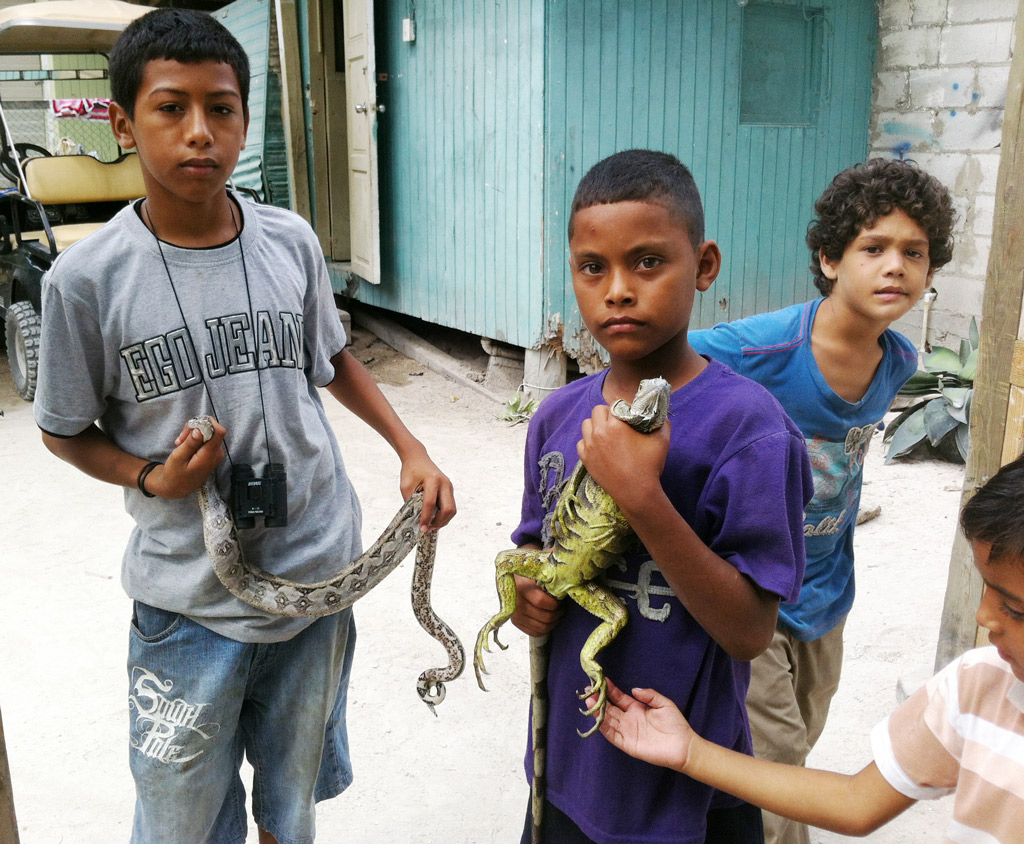 Boys will be boys??? Animal cruelty should never, ever be attributed to a stage of development in a child’s life.

Two months ago headlines countrywide were heavy with the story about a wild Howler Monkey that was brutally killed by school children at the Belize High School of Agriculture in Orange Walk. As if the story wasn’t disturbing enough, a video taken on someone’s phone was circulated on the Internet, capturing the gruesome mob of children as they delighted in killing the helpless animal. The act of senseless violence outraged the public and when the Belize Forest Department pressed charges against the killers it was a step applauded by many. And although it was gratifying to see justice served, the root of the problem was overlooked. Just what possessed, and I mean possessed in every sense of the word these children to behave this way. How can children gleefully partake in the beating death of a helpless animal?

Last week The San Pedro Sun reported on another story of children actively participating in animal cruelty. And a very treacherous one at that! Risking life and limb to pull a live crocodile from a trap with the sole intention of torturing and killing it makes for what some may consider an unbalanced mind…and perhaps a dangerous one at that. What would possess a group of young boys to do such a thing? Herein lays the question, and the root of the problem.

Why are some children inspired to behave this way? Most behaviors are either learned or mimicked, so who is influencing these children? Perhaps their parents have the same attitude, or sadly perhaps the children are on the other end of the brutality, just acting out what has already been done to them? Animal abuse can be an indicator of the likelihood of future acts of violence. Abusers and children who witness abuse may become desensitized to violence and may lose the ability to empathize with victims.

In reference to a fact sheet issued by Be Kind Belize, Understanding the Connection Between Animal Cruelty and Human Violence, animal cruelty can be one of the earliest and most dramatic indicators that an individual is developing a pattern of seeking power and control by inflicting suffering on others. Most animal abusers are adolescent or young adult males, although children as young as four have been known to harm animals. Many animal abusers have a history of other antisocial or criminal activities, including vandalism, assault, and arson, and many are the victims of physical or sexual abuse. Animal cruelty is often associated with children who do poorly in school and have low self-esteem and few friends.

Especially alarming is that there is evidence of a connection between animal cruelty and human violence. Many studies in psychology, sociology, and criminology during the last 25 years have demonstrated that violent offenders frequently have childhood and adolescent histories of serious and repeated animal cruelty. The FBI in the USA has recognized the connection since the 1970s, when bureau analysis of the life histories of imprisoned serial killers suggested that most, as children, had killed or tortured animals. Other research has shown consistent patterns of animal cruelty among perpetrators of more common forms of violence, including child abuse, spouse abuse, and elder abuse.

How can we prevent this from happening in the first place? Educating children that all living creatures experience pain and suffering, including animals, and discussing the similarities between us and animals should develop empathy and go a long way towards preventing future cruelty. We as adults need to be mindful of how our children are behaving and always keep in mind that children take OUR actions to heart…the good, the bad and the ugly.

The only way to stop the abuse is intervention. The earlier we intervene the higher the rate of success. Don’t turn a blind eye to this behavior, and brushing it off as “boys will be boys” is inexcusable. We should never disregard acts of animal cruelty as childish pranks; otherwise we are giving children permission to inflict pain without fear of being punished. Sure they want to explore the animal world; however, not all of them torture and kill them. If a parent allows a child to harm animals it is highly likely that child will be violent in later life. Animal cruelty should never, ever be attributed to a stage of development in a child’s life. As adults we must take EVERY opportunity to tell them to be kind to animals…and ask them, “Is this how you would like to be treated?” This food for thought, reinforced can be one step towards instilling sensitivity.

If you are concerned about your child’s behavior towards animals there are means for professional help. Starting with your family doctor, you can take the measures necessary to help and prevent the violent future your child may be headed towards.

Letter to the Editor: A Note on Incompetence