« Older: CG Esthetics presents new toning body wrap: “It Works”
Newer: » SAGA: How to Be a Good Dog Owner and a Great Neighbour

Repairs on the Sir Barry Bowen Bridge have begun


Old School Ferry Crossing is back!

The San Pedro Town Council (SPTC) announced that on Sunday, May 19th the Sir Barry Bowen Bridge would be closed in order to perform much needed repairs on its deck. Since its inauguration in February 2006, the bridge has never seen a major repair. In April of 2012 Belize City based Civil Engineer Doug Walkner assessed the stability of the bridge. His report indicated that the major problem was corrosion of the grills due to the exposure to salt water. The new deck for the Sir Barry Bowen Bridge would be expected to take about six months to complete construction. 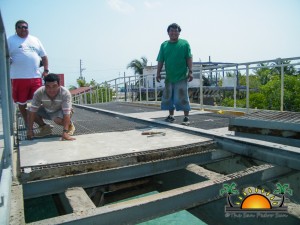 Some much needed repairs finally commenced on Monday, May 20th when the old bolts that held the grills together were removed. On Tuesday, May 21st workers began to remove the grill. However the structure is still intact and stable, so the repairs would be mostly superficial. The grills will be replaced by galvanized beams, which are being imported from England, and three and a half inch hard wood planks. The pedestrian walk will be replaced with fiber reinforced material.

The Mayor has come under criticism from residents across the bridge who have complained that work on the bridge did not commence on the date that was scheduled. In addition there are concerns that repairs on the bridge may not be completed in the two-week span that SPTC has given. While the Mayor did agree that work was delayed by a few days, he said northern residents need to be patient and more understanding. “Yes we delayed on the commencement of the project but we also delayed on the closure of the bridge. The time has come and we are finally starting. I am hopeful that the bridge is completed in the two weeks that we have mentioned. If we need to extend the time period, then we simply have to do so.” stated Guerrero. He added that while works are currently ongoing in other areas and is also an inconvenience to some residents, Mayor Guerrero said that those residents understand and, “I wish that everyone was as understanding.” 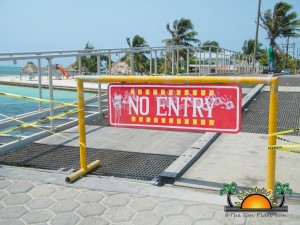 Mayor Daniel Guerrero has been present at the construction site, overlooking the work and ensuring that they meet high standards. According to Guerrero the repairs are costing approximately $150,000 to $200,00 and that the money is coming from the toll booth collections. “Once the bridge finishes, we must pay more attention to its maintenance to ensure that it lasts,” stated Guerrero.

The repairs are expected to take about two weeks, and residents and tourists are asked to please be patient and cope with the detour since the repairs are absolutely necessary. In the meantime locals have reverted to provide the old ferry service to those wishing to cross with golf cart to North Ambergris Caye. It is certainly nostalgic of the times before the bridge was in place, so for those looking to reminisce, be sure to catch a ‘ferry’ ride or at least check out the hard-working enterprising people who are offering this much needed service. Those services are being offered at a cost of $5.00 per crossing.

The Mayor also took the opportunity to take the media in other areas where works are currently on going. Those areas included Conch Shell Street where Belize Water Service is installing new water and sewer lines, on Coconut Drive where Medina’s construction are conducting repairs on the main road and in the Eiley’s Subdivision off the marina road where the SPTC is opening new roads. All those works, said Guerrero, are a part of the SPTC’s commitment to improve the infrastructure on the island.

Night of Fashion under the Stars17 Photos

Dr. Graham presents on the Status of Sharks in Belize30 Photos