The 1st Marine Expeditionary Force Civil Affairs Team comprising of four Marines from the United States Marine Corps and one Medic from the US Navy were on Caye Caulker Village to finalize the first stage of their partnership mission in Belize. The team of five’s last mission to Caye Caulker was on Thursday October 10th, when they met with the principal of the primary school and other stakeholders to wrap up their work in the area. 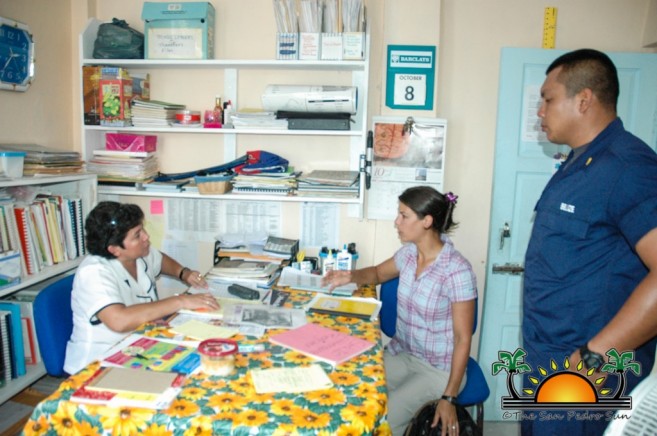 The mission of the US group is to visit communities, conduct partnered operations with various government agencies and look for ways how to improve readiness and response to humanitarian relief scenarios. While in Caye Caulker they met with various civil components including the police department, the fire department and the schools, who all play an important role in case of a disaster.
The 1st Marine Expeditionary Force Civil Affairs Team partnered with the Belize National Coast Guard who introduced them to the various Caye Caulker authorities. Currently the Coast Guard is completing their last phase of their northernmost base situated on Ambergris Caye, and as such, the coast guard will have a permanent presence in the area. According to Ensign Glen Noh, the Belize Coast Guard meeting with the various entities on Caye Caulker will help foster a better relationship with the community.

The team, headed by Captain Sarah Culbertson of the US Marine Corps, are now in the Cayo District where they are expected to conduct similar partnership operations with members of the Belize Defense Force. Following their four-week stay in the Cayo district, where they are expected to cover a wide area, they will move to Belize’s southern district of Toledo.
The information gathered from the current exercise in Belize will be compiled and made available for sharing with other similar groups who need information or wish to follow-up with the ground-work completed so far as it relates to disaster readiness and response. The group is expected to remain in the country through mid-December.