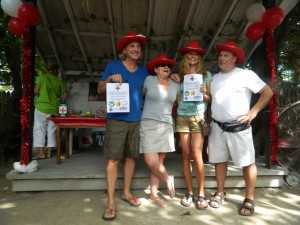 On Saturday December 14th, The San Pedro Red Cross held a Christmas Bake Sale at Roadkill Bar on Coconut Drive. The sale featured tasty treats from some of the island’s best bakers and was held from 11AM to 2PM. Islanders had the chance to satisfy their sweet tooth while they contributed to a “sweet” cause, as the proceeds raised went towards funding the training of San Pedro High School teachers in First-Aid. The San Pedro Red Cross Branch was able to find sponsors for all 30 teachers before the sale. During the fundraiser sale, a check was presented on behalf of Mark and Brooke Maggiotto, who generously sponsored 19 of the teachers. Among those that came out to support the Red Cross sale were: Coco Loco’s Beach Bar, Casa Picasso, The San Pedro Lions Club, Sherry (Lil Red), Edward D. Mulligan and Paul of Caye Coffee, who also donated $5 to every bag that was sold. The San Pedro Red Cross Branch extends much gratitude to Wade and Kathy of Roadkill for hosting the event, and also to everyone else who contributed in making this fundraiser a success. Training for these teachers will take place on Friday, December 20th.
The grand total raised from the bake sale was $1,658.75. Proceeds will now be used to start a fund for The San Pedro Roman Catholic School teachers to receive training in First-Aid. If you would like to sponsor one of teachers please email Shirlee Arnould at [email protected]

On the same day Jessie Young and Terence Woodeye, Red Cross members from Belize City visited the island to carry out the American Red Cross/ John Hopkins University end-line survey. The survey measured the various project impacts on the community’s awareness and preparedness for emergencies and disasters in San Pedro. This survey was part two the “Saving Lives in the Caribbean through Preparedness” project. The same questions were asked in early 2012, noting any difference in the responses will help to give an idea of the project’s impacts on the community. These results will be shared with The San Pedro Red Cross after the results have been analyzed by The American Red Cross. 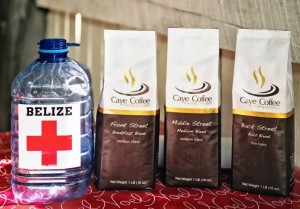 The weekend also marked the Belize Red Cross Youth Agents for Change (Y-AC) “Street Beat” Training and Activity on December 13th and 14th at the ITVET compound. San Pedro Red Cross members Shirlee Arnould and Mike Memeo attended as The Belize Red Cross headquarters extended an invitation for two people from every branch to attend “Street Beat”. The activity saw presentations from various volunteers who are trained in HIV/AIDS and Sexual and Reproductive Health which provided information to the public on various areas including prevention and VCT Sites (Voluntary Counseling and Testing) in their respective communities.
The San Pedro Red Cross invites the community to attend their afternoon Christmas party and fundraiser which will be hosted by Coco Loco’s Beach Bar (north of the Bridge) on Friday December 30th, starting at 3PM. Owners Sue and Steve will be collecting First Aid supplies on behalf of the Belize Red Cross San Pedro Branch.
The San Pedro Sun commends The San Pedro Red Cross branch on all the hard work done in 2013 and looks forward to more great initiatives to come in the New Year.