On Friday, February 21st, Isla Bonita Elementary School opened its gates to the public to showcase their upper division students’ work via an open house. The open house demonstrated the students’ elaborate demonstrative booths on Drug Abuse, HIV/AIDS and Sexually Transmitted Disease (STD) and the Effects of Smoking. Judging each booth was Officer in Charge of the San Pedro Police Department Luis Castellanos and Police Constable (PC) Juan Chuc.

Using an array of pamphlets, examples, games and more, the students not only explained their topics but also identified the problem’s causes in a community. A group of standard six students, whose topic was Alcohol Abuse, explained how the heavy consumption of alcoholic beverages is affecting the youth of San Pedro. “Children of San Pedro are drinking alcohol before they turn 18. This is causing health problems such as Cirrhosis of the liver,” explained one of the group members. Castellanos further elaborated on the topic, giving real life examples of alcohol abuse that occur in San Pedro Town. After a series of fun question and answer games it was time to move to the next booth.

The second booth, displayed the effects of smoking. The members of this group surely demonstrated their designing abilities, as they had created an extra-large replica of a cigarette. Once again the students proved to be well knowledge about the topic. The members took turns in explain the causes, effects and diseases affiliated with smoking, both illegal and legal substances. 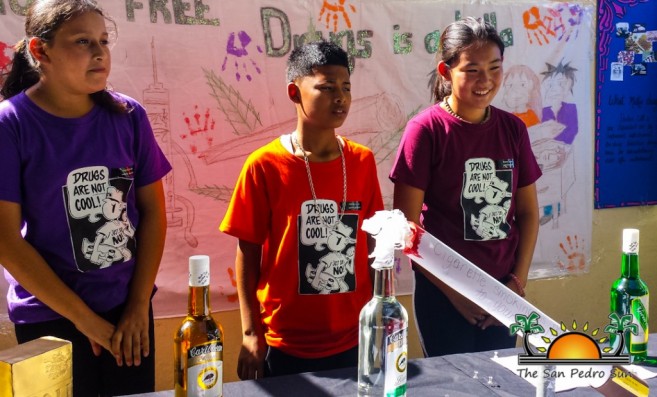 The final topic was discussed in the open house was HIV/AIDS and STDs. This was one of the most delicate topics, but without a doubt, each group delivered information flawlessly. The groups explained the impact of STDs, particularly HIV/AIDS, to Belize and San Pedro Town. Castellanos also assisted the groups with advice and real life examples on the topic.

The open house was a huge success, each group of students were well versed and very interactive. The San Pedro Sun congratulates Isla Bonita Elementary School and all the participating students on a job well done!