Sunday October 6, 2013, would have been the date for the joint Belize –Guatemala referendum to see if the people of both nations were willing to have the unfounded Guatemalan claim taken and settled before the International Court of Justice (ICJ). But months before the agreed date, Guatemalan government pulled out and so far, there is no concrete information as to when and if it will be held. The Belize Referendum Unit updated the media on Thursday March 20th about some of the work the 30-member Referendum Commission has been engaged in. 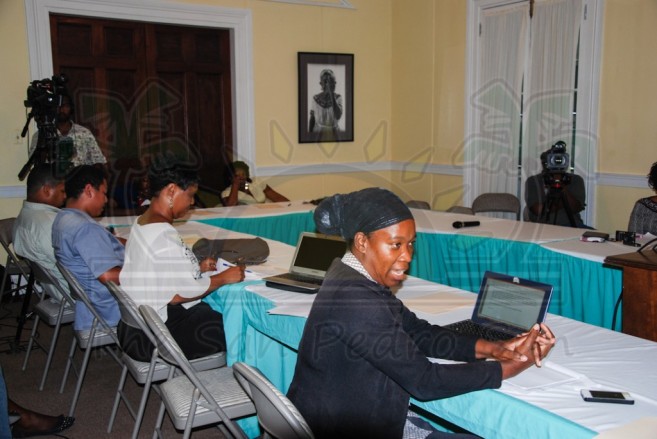 Present at the meeting held at the House of Culture in Belize City were the Chairman of the Referendum Commission Ambassador James Murphy, Coordinator of the Referendum Unit Ambassador Stuart Leslie and Chief Executive Officer in the Ministry of Natural Resources, Alexis Rosado. According to Rosado, while the referendum is one issue, they are working simultaneously in strengthening cooperation with the Belize-Guatemala Joint Commission setup earlier in January of 2014.
Rosado explained that the work of the Joint Commission is moving hand in hand with the Referendum Unions and hopes that by the final meeting in December, a way forward can be reached. For the time being, a slightly different approach is being taken to address issues between the two countries. “Over the years, the subject of the claim has tended to kind of absorb all the energies that we have in our bilateral relations, so that when it comes to collaborative efforts, those have basically gone by the wayside because we have been concentrating on finding a solution to this claim which has eluded us. This time the minister decided to take a slightly different approach. It’s not that we will no longer be looking at finding a definitive solution to the problem, but in the meantime until such time as we arrive at a solution, why don’t we concentrate our efforts in building bridges, in finding means of cooperation in areas that are practical and that will bring tangible benefits to our societies,” said Rosado.

According to Leslie, while there is not a date for a referendum, Belize should remain committed to dialogue. He said that as part of the Joint Commission, both countries have agreed to find ways that can strengthen tides beneficial to the people of both nations. “We cannot abandon contined to engagement with the Guatemalans, whether we believe or don’t believe they are acting in bad faith… we have thousands of Belizeans who live on that border, who share that border with Guatemala and that interact on a daily basis and that is driving commerce; people are going to doctors [over the border]. We have to continue as a country, as a responsible country, and as a Foreign Ministry that is responsible for a great part of the territorial integrity of Belize, we have to continue to engage with our neighbor like all other countries that have a dispute. We cannot walk away from the table, because if you walk away from the table, then what happens to those people at the border?” said Leslie when questioned about the patience with which Belize deals with their Guatemalan counterparts.
Leslie said that the Referendum Unit will continue with their education campaign as being mandated to them by the Referendum Commission. “We continue to do our awareness campaign because that was the mandate given to us by our referendum commission, approved by the minister, who said that we must continue the education of Belizeans to give them the pros, the risks, the cons and the advantages of going to court,” commented Leslie. He added that referendum unit will continue its work by gathering data, building a great research library on articles printed regarding the referendum process and assisting in every way possible in the next phase of confidence-building negotiations between the two countries.

When asked if the Guatemalan counterparts communicated their reason for pulling out of the referendum, Rosando said no official reason was presented. He said however that the Guatemalan Foreign Minister had concerns with the referendum threshold in Belize. That threshold requires a minimum of 60% of the total registered voters to participate to make the results valid. Ambassador Leslie told the press that as part of the work of the Referendum Unit, they contracted the services of Precision Data & Analysis to conduct an independent poll to see how Belizeans would vote on October 16 should the referendum had taken place. “We were happy when the results showed that sixty-seven percent of those polled said that they would participate in a referendum on October 6th… We were also excited about the fact that eighteen percent of those polled remained undecided. And this again was only after the first phase of our campaign in three months. So that excited us at the referendum unit, along with the facilitators and all our people who were out across the country making presentations on our behalf and so excellent, we thought, good work done,” reported Leslie who said that 1,500 people were polled from across the country.
When questioned about some of the current illegal activities by Guatemalan in Belize territory, Rosado conceded that those areas are of concerns remain challenging. Those areas include the regular encroachment by Guatemalans on the Belize territory, gold panning and illegal extraction of rosewood from Belize and into Guatemala. Rosado said that as part of the Joint Commission, they are looking at ways to strength these areas of the concerns. One of the areas of “very high priority” is security and as part of the next meeting of the Joint Commission, Rosado said there will be discussion regarding a proposal by Guatemala for police authorities in Melchor de Mencos and Benque Viejo Del Carmen in Belize to expand their formal collaboration.
The Joint Commission meets again on March 30th in Antigua, Guatemala while the Foreign Ministers of both countries are scheduled to meet in June. At that meeting in June, the Foreign Minister will review the work of the Joint Commission. A final meeting is schedule in December where an entire structure is expected to be put in place and recommendations will be made on the way forward.