For many years The Republic of Guatemala has asserted its claim over portions of Belizean land. In 1859 the Anglo-Guatemalan treaty was signed between the Queen of England and Guatemala. In the treaty Guatemala accepted the British Colony (years after renamed Belize) and its boundaries and in return a “cart road” was to be erected from Guatemala to Punta Gorda to allow Guatemalans access to the sea. With the road never being constructed, in 1940 Guatemala claimed that the treaty of 1859 was void due to the failure to comply with the regulations under Article 7 of the treaty. Since then many attempts for reaching a peaceful settlement between the two countries through diplomatic arrangement have been made. Little has been achieved from them as attempts have been fruitless. Over the years Belize has received support from the United States of America, Mexico, Nicaragua, Cuba and Panama in its negotiations for a peaceful solution to Guatemala’s claim. Guatemala has also continuously, over the years, changed the area of land being claimed. The last claim made in 1999 included the area from the Sibun River to the Sarstoon River and all the cayes, with the exception of St. George’s Caye. The government of Belize and its people remain firm in their intent to not compromise even one square inch of Belizean land to be handed over to the Guatemalans. 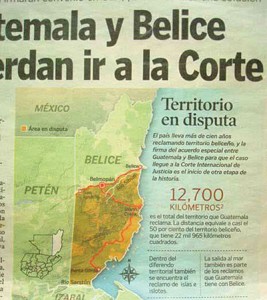 Photo Courtesy of The Belize Times.

A long history of failed negotiations between Guatemala and Belize has led many to the general conclusion that it is unlikely that the dispute will be resolved through further diplomatic negotiations. This situation has pushed government officials to seek alternative means for solving Guatemala’s land claim. As a result of the signing of a special agreement in 2005, the Organization of American State (OAS) has recommended that the matter be solved via an international court. It is believed that the International Court of Justice (ICJ) may be able to settle this problem once and for all, since the ICJ has for so long resolved disputes amongst countries. The Government of Belize (GOB) submitted its case to four eminent international lawyers to gain an insight on what the chances are that Belize can win against Guatemala at the ICJ. The proposal took a little over a year to be completed. The well experienced panel of researchers retained by GOB, including a past judge of the ICJ, sought to see whether the courts would rule in favor of Belize, should Belize decide to take this case to the ICJ. The results from the analysis were in favor of Belize. The international law practitioners concluded that “Belize possesses a good title to the whole of the territory, including the islands that it presently administers, within the limits set by the Convention of 30 April 1859 between Britain and Guatemala relative to the boundary of British Honduras.” (Quoted from the Legal Opinion given to Belize on Guatemala’s territorial claim.)

On December 8, 2008 Belize and Guatemala signed a special agreement on the territorial differendum. This special agreement is in order for both Guatemala and Belize to submit a referendum for the decision on whether the ICJ should be the one to settle the territorial dispute. This referendum is to be voted on democratically by the people of the country. Both countries in question are to vote on the referendum on similar days. With this in play, government officials along with Ambassador James Murphy have been traveling across the country visiting Junior Colleges to inform the students on the issue at hand and the role they played in the referendum.

On Thursday 24 January, they visited the San Pedro Junior College (SPJC) and spoke to the student population on the upcoming events and the impact the decision will carry. At the presentation Ambassador Murphy spoke to the students of the history between Guatemala and Belize and the long time claim for land. Even though Belize is inferior in both size and population in comparison to Guatemala, it is more than certain that Belize will yield neither land nor sea. Murphy also expressed the importance of finding a resolution to the Guatemalan-Belize dispute soon, since their constant claim interferes with the growth and development of the country. Murphy explained that the treaty of 1859, which Guatemala claims to be invalid, is still legally in effect clearly outlining all the boundaries of the country including the islands that fall under jurisdiction of Belize. There was also further discussion of the chances that Belize stands should the case be taken to the ICJ. The students had a chance to voice their concerns and what they believed was the best way to solve this problem. Although many students are for Belize to go to the ICJ, persons need to fully understand what can be the negative outcomes of the situation. For one, going to the ICJ is rather costly and there are no guaranteed results in favor of Belize. The most important risk of taking the differendum to the ICJ is that there is still a minimal possibility that the court could make a decision that is not in favour of Belize, that results in the boundary or title to the territory as it exists to be adjusted.

On October 6, 2013 registered electorates will be asked to vote and answer the question “Do you agree that any legal claim of Guatemala against Belize relating to land and insular territories and to any maritime areas pertaining to these territories should be submitted to the International Court of Justice for final settlement and that it determine finally the boundaries of the respective territories and areas of the parties?” All registered voters are asked to participate. The results from THIS referendum will be legally binding only if 60% of the voter population casts their vote. The public is asked to consider the situation diligently and exercise their right to democracy by voting after being properly informed on the pros and cons of going to the ICJ.