Mothers of La Isla Bonita were treated to an extravaganza of entertainment, drinks, food and fun this Mother’s Day. Hosted by The San Pedro Town Council (SPTC), the Saturday May 10th event saw a variety of dances and music and comedic entertainment for hundreds of mothers who gathered at the old football field. Greeting the mommies with flowers and big smiles were members of the SPTC and Miss Chiquitita Zillah Flota. Flowers in hand, mothers were then seated and tended to by students of San Pedro High School. By 8:30PM, the show, which promised to be full of entertainment and laughter, began.

After the traditional greeting by officials, who lauded the praises of the hardworking mothers of this island, it was time for the San Pedro Dance Academy to take the stage and honor the attendees with some beautiful choreographed performances. During the performances, a delicious dinner and refreshing beverages were served. While dancers took a breather, Master of Ceremonies Eiden Salazar Jr. was joined by Councilor Carlos Barrientos to lead the charge in the fun giveaways donated by generous businesses on the island.

From the mom with the whitest hair, most jewelry, matching manicures and pedicures, to the modern mom with both an iPad and iPhone in her possession, to best hairstyle, biggest purse, and “blingiest” shoes (which brought out a parade of mommies in sparkly heels ready for competition), there was an abundance of prizes to give out! Adding to the excitement were a few raffles with a stove, TV and microwave donated by Wings, island distributor of Mabe products, and a stove donated by Lino’s Meats. MC Eiden kept the laughter coming with his witty commentary throughout the proceedings, and there was no shortage of laughs coming from the gathered crowd. 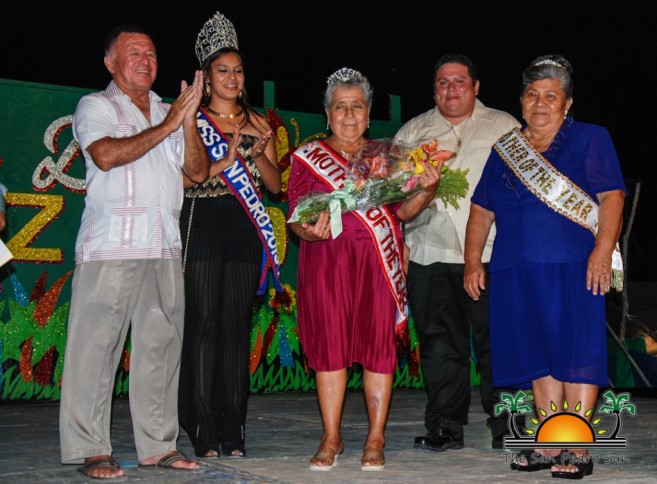 Happy mothers collected their prizes and when the final gift was handed out, it was time to announce the 2014 Mother of the Year. Volunteers had gathered the names of all mothers over the age of 65 that were in attendance, and the names were placed in a box, shuffled properly, and one name was drawn. There was an expectant pause before Honorable Manuel Heredia announced that the new Mother of the Year is Idolina Vasquez. 2013’s Mother of the Year Mrs. Carola Kumul presented her with a bouquet of beautiful flowers, while Miss San Pedro Solani Graniel placed a sash and tiara on her, making her title official.

With the crowning of the new Mother of the Year, it was time for the real fun! Leading the night’s entertainment were imitator Danny Movar, singer Julia Manrique and comedian Ismael Salazar. The Merida, Yucatan entertainers brought a touch of irreverence, much humor and fine musical performances that led to the wee hours of the morning, when a mariachi band took the stage to serenade those mothers who stayed to enjoy every last bit of the extravaganza show organized for them.

The SPTC certainly celebrated the mothers of the island in fine style. Sponsors for the event are also commended, as are the student volunteers, our island queens and everyone who helped in one way or the other in making the night a great one. To everyone who helped: a very BIG thank you!