The San Pedro Town Council (SPTC) spread love to the mothers of the San Pedro community in a huge celebration that took place on Saturday May, 11th. Every year, mothers look forward to an evening of entertainment, dinner, laughter, drinks, prizes and surprises, and this year it was no exception.

Hundreds of mothers filed in to Central Park, which was transformed into a comfortable venue for the event. There they were greeted by Miss San Pedro Naiely Puc, who presented them with a beautiful rose. They were then guided to tables by ushers for the night, San Pedro High School (SPHS) students. Once seated, mommies waited for the show to commence.

Master of Ceremonies, Eiden Salazar Jr., led the evening’s events. After the national anthem and a heartfelt prayer by Clive Welsh, Mayor Daniel Guerrero addressed the crowd and delivered a speech to all mothers present. He expressed his gratitude to all the mothers – past, present and future – who take care of us on the island. He indicated that though he felt the loss of his own mother, he was grateful for the time and memories he had with her and implored those who still had the gift of their mother’s presence to show appreciation not only on one day, but every day. Area Representative, Honorable Manuel Heredia, also took the stage to express his heartfelt sentiments to the mothers who build the backbone of society.

With the formalities and speeches over, MC Eiden announced the entertainment lined up for the night. First to take the stage was Miss Chiquitita 2013, Zillah Flota, who wowed the crowd with her amazing performance on life here on the island of San Pedro. Following Zillah’s performance was a lyrical dance by The San Pedro Dance Academy. The graceful girls of all ages dance across the stage in colorful costumes, delighting every mother in attendance. The mothers also got to enjoy the melodious voices of two San Pedro teens, Elina Palma and Neslen Rivero, as they took stage and tribute their mothers.

Then the real fun began, when a few games brought out the playfulness in the moms in attendance. MC Eiden called up mothers who believed they were wearing the most glamorous shoes, and even mothers who had an embroidered handkerchief in their possession during the night. The mothers who made it to the stage first won prizes donated by the very generous business sponsors from around town.

After six mothers gave their own dance performance to PSY’s “Gangnam Style” that had everyone laughing and applauding, dinner and drinks were served. Even dinner was exciting, and not just to the tastebuds! There were fifteen special plates with a piece of candy hidden in the bread rolls that guaranteed prizes for the lucky mothers. That evening’s dinner full of fun. Raffles were also held throughout the night, and winning ticket holders got to take home great prizes like blenders, mixers, gift baskets, gift certificates, cash and even a bicycle.

Dinner was then followed by the traditional musical chairs. Ten brave mothers took to the stage and danced to the latest tracks while trying to get a seat when the music seized. Laughter filled the air as mothers fought to keep their seats. The games were definitely the highlight of the evening. After a few rounds of fun, 2012 Mother of the Year, Mrs. Medrano was called to come up on stage and help crown the new Mother of the Year. Volunteers had gathered the names of all mothers over the age of 65 that were in attendance, and the names were placed in a box, shuffled properly, and one name was drawn. There was an expectant pause before Mayor Guerrero announced the winner of 2013 Mother of the Year. She is Mrs. Carola Cumul. She was presented with a tiara, sash, a gorgeous bouquet of flowers, a framed tile from Gecko Graphics, plus $500 cash from the SPTC. Minister Heredia promptly added $200 extra to the list of prizes. 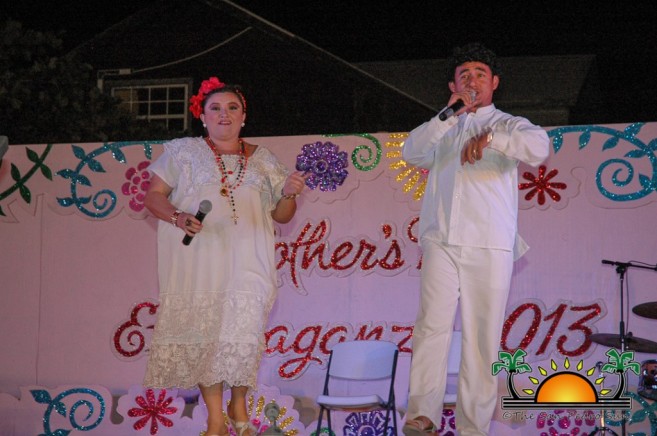 By then, it was after midnight, and the real fun began. Highlighting the evening was the musical comedy show of X’Pet and El Cocotazo, and imitating the voice of Juan Gabriel, Jose Gabriel all the way from Merida, Yucatan, Mexico. The show had the mommies laughing all the way to the wee hours of the morning, since the extravaganza went on past 2AM. It was surely a show to remember.

Thank you, SPTC for celebrating the well-deserving island mothers. It was a fantastic evening for all in attendance, and the SPTC is commended for putting on a great show. The SPTC also thanks the generous sponsors who helped make the night such a success. To the SPTC staff, student volunteers, reigning pageant girls, SP police and everyone who helped in one way or the other in making the night a great one, a very big thank you!