« Older: Garbage Transfer Station soon to be operational
Newer: » Support Food Drive for a worthy cause


For years, developers on Ambergris Caye were not allowed to construct buildings with more than four stories. But due to the increase in property value, Area Representative Manual Heredia Jr. has indicated that after serious discussions, the Government of Belize, through the Ministry of Housing and Urban Development, are allowing buildings to have as much as five floors. This is to allow developers to utilize their property to its maximum potential while allowing for landscaping. 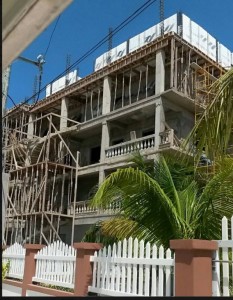 A couple of existing developments across the island have already been approved to build five floors. In order to get approved, Environmental Impact Assessments (EIA) must be made to confirm that the area of the development can sustain the extra weight and to ensure that a solid foundation can be achieved. “A couple of months ago, it was decided that in view of the rising property costs, developers were building in the full square footage of their property. They were not leaving any place for greenery, and we don’t want this to happen because we want to continue promoting a natural ambiance. The change that has been made is not that significant. While we are allowing buildings to go up an extra floor, they still have to adhere to a set height that the building cannot exceed. The new regulation is only allowing for four feet more than the originally set height of 38 feet. Any building that goes up to five floors will have to have a flat roof,” said Heredia.
Currently, considerations for developers to build five floors are only being given in the far south and north of San Pedro Town. Heredia stated that there has been no discussion if whether five floor buildings will even be allowed within the town core. “It depends on the area and type of development that is being made. If the area is too sensitive or doesn’t not have the type of bedrock to support the building, then it will not be approved,” said Heredia.
Developers must get an EIA approved from the Department of Environment before building plans are presented to The San Pedro Town Council, Ambergris Caye Local Building Authority and the Area Representative for approval.