Last month, on June 5th, 34 single mothers from San Pedro graduated from the BA-1 project on Violence against Women, Trafficking and Femicide. A collaboration between the Women’s Department of Belize and the Central American Integration System (SICA), the training was designed to empower participants with the necessary tools in order to gain personal development. On Wednesday, July 15th, a public meeting was held at the Lion’s Den with the project’s graduates presenting an overview of the program. The meeting also included presentations on human trafficking from a representative of the Anti-Trafficking Person Council (ATIPS) in the Women’s Department, within the Ministry of Human Development.

The event started with the welcome address delivered by San Pedro Town Councilor Flora Ancona. “The advancement of the women’s agenda on the island is a key component and an emphasis the San Pedro Town Council is placing on social issues affecting women in San Pedro,” Ancona continued stating that the program was not just for San Pedro but also the sister island of Caye Caulker. “In April of this year, we endorsed the recommendation of the Central American Integration System and the Ministry of Human Development through the Women’s Department to implement the B A 1 project in San Pedro. However, we went ahead to include Caye Caulker as part of the program because as a tourism community, we also need to assist our sister island,” said Ancona. She invited the attendees to share their experiences, to analyze what the organizers of the project are doing and let them know where there is the need for improvement in regards to the prevention of violence against women on the island. “You all as the beneficiaries of the program have the right to let us know if the project is going in the right direction and what suggestions you may all have. We are all looking at the issues affecting everybody, such as domestic abuse, financial abuse, verbal and mental abuse, rape, femicide, murder, discrimination and trafficking of persons. If we educate ourselves and work together, we can overcome all these obstacles that affect women today.” 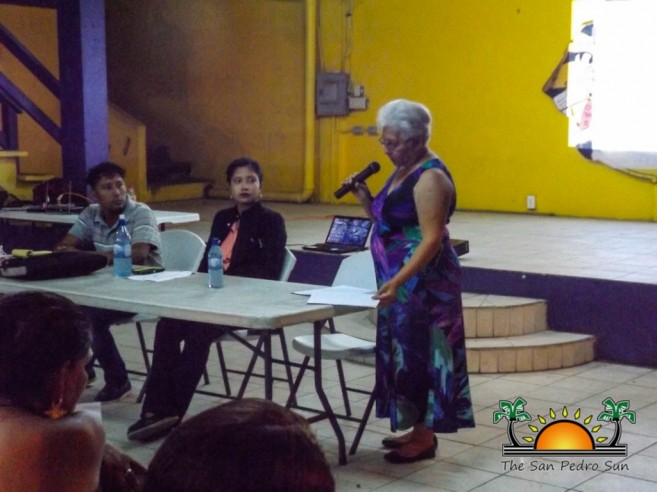 After the opening remarks, B A 1 project coordinator, Jorge Aldana, gave an overview of the program and its recent updates. “This project also has four areas which SICA has adopted as part of sustainable human development. These areas comprise of crime fighting, violence prevention, rehabilitation and reintegration, and institutional strengthening. The last factor that deals with institutional strengthening is very important, as having in mind that one of the major institutions we work with is the Police Department. The police are key personnel we come in contact with from time to time when it relates to violence against women,” said Aldana. He went on to further state which other areas the program is covering as well. “The project looks at risk factors about violence not only affecting women, but also it covers the components of youth, gender based violence, smuggling and human trafficking. Not to mention the abuse of women in the area of drugs, and climate change, as this has an effect on the livelihood of women dependent on their environment,” said Aldana. 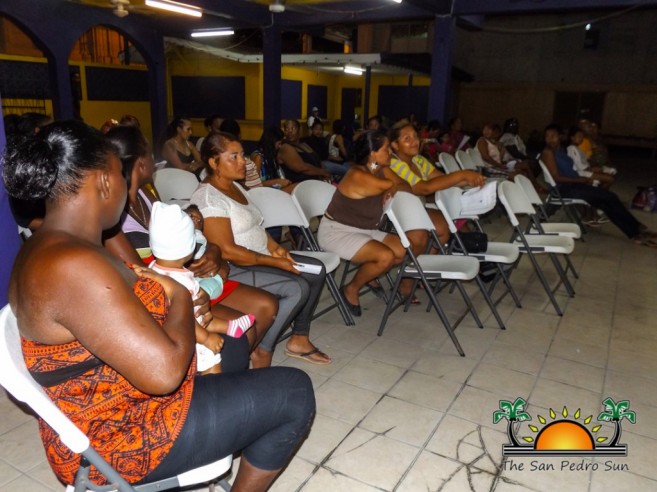 Aldana mentioned that the B A 1 project came about in Belize after a study was done revealing that violence against women and human trafficking was a problem. “San Pedro is a prime area where the problem has been identified. Violence against women is a reality, but it can be minimized if we have the right institutional capability and training. It is a preventable crime that is protected in three of our laws made up of The Constitution of Belize, the Convention of the Rights of a Child, and the 2000 and 2013 Revision of the Criminal Code,” said Aldana.
It is expected that over 300 persons will be trained and assisted in the development of small business and life planning as part of the program. A portion of this amount has already been trained in San Pedro and they are expected to benefit from a grant in August. Meanwhile, on July 27th, a new set of women will be trained in Caye Caulker, south side Belize City and in the Cayo District. “We want to target 300 persons and have all of them trained so we can proceed with the distribution of grants for the participants who are women that are victims or at risk of domestic violence,” ended Aldana.
It is expected that this initiative will also yield support group programs on the island such as anti-bullying, masculinity, violence against women and several other areas encompassing the youth. Another goal of the project is that when it is done, there will be free legal clinics for women who have been victims of violence, along with empowering programs such as a women’s group.
Before the meeting wrapped, up a representative from the Anti-Trafficking Person Council (ATIPS) from the Women’s Department within the Ministry of Human Development, Michelle Segura shared some additional facts on the issue of human trafficking. “Human trafficking is the third largest international crime in the world and it is predicted to soon surpass arms and drugs trafficking. It is becoming a real issue, as traffickers are looking at it as a way to make huge amounts of profit. Usually you can use drugs and ammunition and dispose of them, however, when it comes to people, they can be used over and over,” stated Segura. According to her presentation, the annual profit for human exploitation soars to an amount of $31.6 billion dollars. “The majority of trafficking victims are between the ages of 18 and 24 and an estimated of 1.2 million children are trafficked each year. 43% of the victims are used for sexual exploitation, of which 98% are women,” explained Segura. 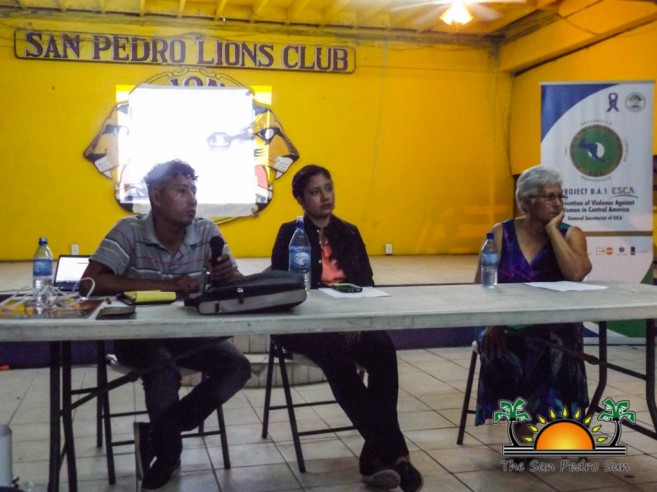 According to Segura, there are several factors that fuels human trafficking, which is like a never ending situation. “Poverty is one of the main reasons that we have human trafficking. This is followed by gender inequality, the absence of equal opportunities, and of course demands for commercial sex, not to mention cheap labor and corruption,” stated Segura. She further explained the 2013 Human Trafficking of Persons Act and urged everyone that may know of current cases to take it to the relevant authorities. “According to the Act, which I will break down for you, it states that if you have a reasonable cause to believe that an offence under the Human Trafficking persons Act has been or will be committed and you intentionally omit to give any information to the relevant authorities, you are therefore committing an offence and will be liable on conviction to a fine of $5,000 or to imprisonment for a term of three years or both,” ended Segura.
The B A 1 project started in 2011 after several discussions between organizations in Belize, Central America, Washington DC, USA, the United Nations, the OAS, and IDB, who supported this initiative started by SICA. This effort was pointed out after a study of women showing a lot of social issues involving them whether the problems had to do with the family or the community structure came to their attention. Thus, the women’s agenda became a key factor after the study. In 2014, Belize launched the B A 1 project and in San Pedro, it was introduced on April of 2015.
The Anti-Trafficking Persons Council (ATIPS) is a multi-sectoral unit made up of different agencies and ministries in the Government of Belize. The anti-trafficking persons council is made up of The Ministry of Human Development, The Ministry of Foreign Affairs, The Attorney General Ministry, Immigration, Office of Public Persecutions, Police Department, Labour Department, Customs Department, The Ministry of Health, The Belize Tourism Board, The National Committee for Family and Children, National Organization for the Prevention of Child Abuse and Neglect, and Youth Enhancement Services.

Clean up, clean up, everybody clean up!