In the early hours of Monday, June 27th, a huge fire engulfed several businesses and homes on Pescador Drive. It was a devastating blaze that left over 88 residents homeless. They are grandparents, parents, children, husbands, wives, friends…and as a community we realize their plight could just as easily been ours. It’s hard to imagine the terrifying experience of surviving such a disaster, and some of them were kind enough to share their harrowing experience with us.
Baltazar Vanegas

For over 20 years he has made a living via his upholstery business “Cortez Upholstery”, and everyone in town is familiar with his work. Vanegas lost everything, including his sewing machines in the blazing fire. He told The San Pedro Sun, that he barely made it out of his apartment after a friend alerted him about the fire. A kind landlord has offered him an apartment to stay in, rent-free, until he gets on his feet. “It bothers me when I think about how I lost my belongings; everything. But I must concentrate in the present and future. I am happy that I am alive and I can work to get on my feet again,” he said. Vanegas indicated that he is in need of tools so he can get back to work immediately. Word is that he has been gifted with an industrial sewing machine, which will go a long way in helping him to start over.
Samuel Pop

Who doesn’t know Sam? He is a well-known waiter at Estel’s Dine by the Sea, whose calm, humble demeanour has earned him countless fans over the years. For the past nine years, Sam, his wife and two children have been renting on the island. They happened to live in the block where the blaze destroyed everything, and they only got out with the clothes on their backs. “Suddenly our room became very hot, and I wondered what was happening. When I opened my window, I saw the inferno. There was no time to save anything,” said Pop. He is thankful to his employer at Estel’s, and to Hostel La Vista for helping him and his family. “I am grateful for the room they gave us, but I have been going around looking for an apartment for me and my family,” he said. “We just need a roof over our head; we don’t even need beds right now…I just know I feel better if I can find a place that I pay rent for and can say is my place for my family. We will be okay.” He also thanked the many friends from abroad (met through his work) who have been so encouraging and kind to him.
Romel Bardales 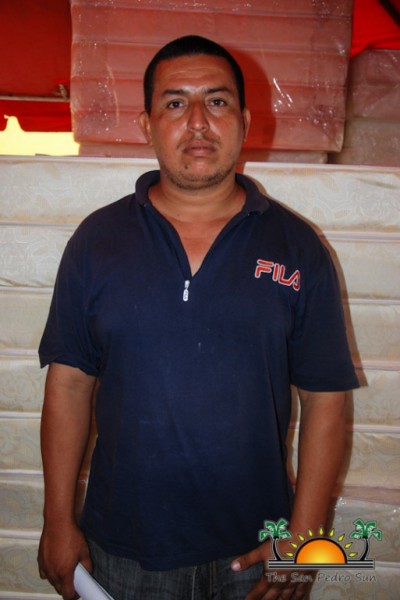 Romel was the operator of a fruit and vegetable shop in the immediate area where the fire took place. He along with his wife and two children they lost everything, even though they tried their best to save some belongings. The raging fire was too fast for them. Romel and his family are now staying at what used to be his store room a block away from his former business.
He had been mindful that he would have to move from the location eventually, as the building was for sale. However, he never thought that it would be in such a manner, and losing everything in the process. Romel told us that in his desperation, he only was able to take out two freezers from his shop, one which was full of shrimps. But he was only able to take them out of the building, and they were still destroyed in the blaze. He is thankful for the help that has been given to him so far, and for the community support his family is receiving. “Is not the end, life continues, if there is life, there is hope and I hope I have an opportunity to re-open my business soon…very soon,” he said. “I appreciate all the help I am getting from everyone. I really need to get back to work, I need tools… I need to start my business in order to generate income for my family,” he said.
Mark Flowers

Mark Flowers is a local labourer with a family of five. In what he describes as the most horrible experience he has lived through, his first priority was to get his young children out to safety from the blazing inferno. He was also able to save a bag of clothes and his stereo.
They have been assisted by local authorities, much like the other fire victims, and the entire family is grateful for the help. Presently staying at the SandBar Hostel, Flowers is actively seeking an apartment for his family so that they can have a private place of their own. “We need cooking utensils, a stovetop would come in really handy, as you know, we need to cook our food. We can only eat dry food for a limited amount of time. Cooking our own food is very vital for us, as it is so much healthier,” said Flowers. He is very appreciative of the help he has received so far from the ‘Fire Victim Relief Fund,’ at the Lions Den. The family of five is asking help to locate an affordable place to live, with enough space and area for cooking. Those who know of a place can check with the hostel and ask for him.