On Thursday, September 26th, the San Pedro Town Council (SPTC) posted on their Facebook page new 2019 Toll Rates to cross the Sir Barry Bowen Bridge into northern Ambergris Caye. The rates were to come into effect on October 16, 2019 but did not sit well with the public. The following day the SPTC announced that they were putting the rates on hold, stating they would revisit the rates and issue an update. The San Pedro Sun visited with Mayor Daniel Guerrero, who stated that these new rates are in a ‘proposal’ stage and still under review. The new rates could come into effect at the beginning of the upcoming tourism high season. 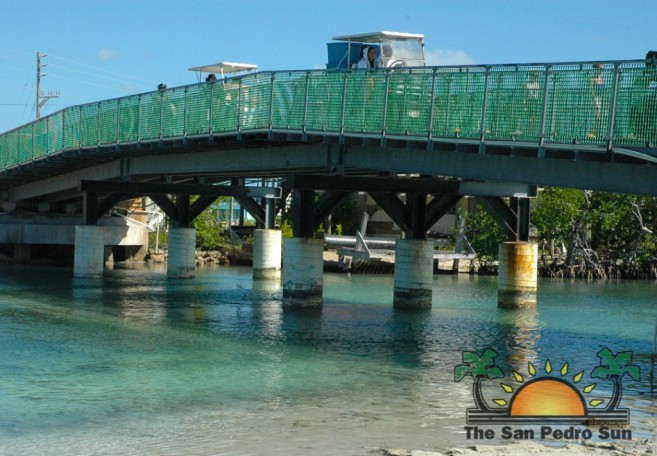 The proposed rates would apply depending on the type of vehicles crossing the bridge. The list of charges included $5 roundtrip for golf carts, $10 for taxis and small private vehicles, $15 for goods vehicles (Ford Rangers and tractors) and $25 for bigger goods vehicles. Flatbed trucks, container trucks and dump trucks (six-wheelers) were to pay $150 roundtrip. In the case of dump trucks (ten-wheelers) they were to pay $150 one way. As for heavy equipment vehicles, the charge was set at $250 roundtrip, while the fee for water trucks was to be $50 per tank and containers would pay $500 for crossing.
Many residents voiced their dissatisfaction with the proposed toll, stating that they were too high and unnecessary. Others say the Mayor should have consulted with residents before posting the new rates. Guerrero said that the rates were not official, and they were revealed on their Facebook page to see the people’s reaction and get their feedback. “We did not put any information; we just put it out there to see what people have to say,” said Guerrero. “People are saying to charge heavy equipment vehicles.” Guerrero could not say what the current fee is, but indicated that not everybody that uses the bridge is paying the toll.
According to Guerrero, the official fees that will come into effect at the beginning of the upcoming tourism season will be very low and will apply to everyone using the bridge. Guerrero disregarded the idea of having a public consultation before the implementation of the new toll, stating that residents will get more information about it during the morning show on Reef TV before the new rates come into effect. The funds collected from the toll are not only for the maintenance of the bridge but roads in different sub-divisions. “If there is enough [money] for another project on the island then we will use those funds for that as well,” said Guerrero.
The SPTC is also planning to build a new toll station by the bridge and count with a police sub-station to maintain police presence. The bridge, 120 feet long and 23 feet wide, reportedly cost BZ$750,000 and was secured through financing provided by Sir Barry Bowen (deceased). It was initially intended to accommodate bicycles, pedestrians, and golf carts and not designed to be heavy weight-bearing. The funds raised through the toll fees were to pay the loan. In 2006 toll fees began upon completion of the bridge, and many islanders believe the loan has been paid. Some call for waiving the fees, but the SPTC has no intention of waiving it as it is another source of income to the municipality, and a mean to maintain the structure.