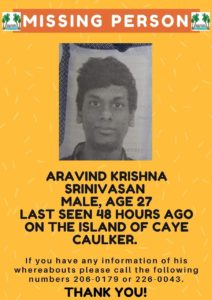 After missing for over 48 hours, the lifeless body of an Indian tourist, 27-year-old Aravind Srinivasan, was found off the coast of Caye Caulker on Thursday, May 20th, by a search team involving the police and the coast guard. The last time Srinivasan was reported alive was on Tuesday, May 18th, when he went kayaking and did not return to his hotel.

Members of the Belize Coast Guard, including the Commissioner of Police Chester Williams, reported that Srinivasan’s body was found southwest of the island. According to an official police report, after the tourist went missing, a fisherman found a canoe/kayak later identified as the one Srinivasan was in. Other personal belongings found included the deceased cell phone and slippers. Police have reported no foul play. The investigation continues.

Concerns about the search

Some islanders question the response of authorities to initiate search efforts. The coast guard was allegedly not informed immediately about the missing person, and other rescue teams in the area were not aware of the incident. According to an unofficial report, the hotel owner where Srinivasan was staying made the report to the police the same day his guest went missing. The hotel owner apparently looked for Srinivasan after police allegedly told him they could not accompany him. Although some Hicaqueños believe the search efforts were lacking, police and the coast guard ramped up their operations on Thursday and found the tourist’s lifeless body.

The Consulate General of India in Belize has been informed. Srinivasan also had a USA Visa type H1B that is issued to professionals with higher education and specialized knowledge. The consulate will inform Srinivasan’s family.