Australian woman and Mexican partner go missing in Yucatan; partner believed to be in Belize 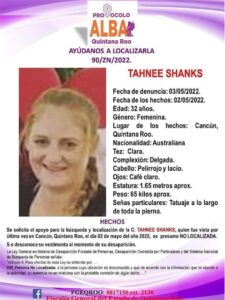 The mysterious disappearance of Australian national 32-year-old Tahnee Shanks and her Mexican partner of the same age Jorge Luis Aguirre Astudillo, in Cancun City, Mexico, is making headlines. Mexican authorities have been searching for the pair since May 2nd, after their two-year-old daughter, Adelynn, was found alone outside a church in Cancun. Witnesses believe it was Astudillo who left the child there. There are no clear leads as to what may have happened to them. While the State of Quintana Roo district attorney has not ruled out the possibility that both were abducted, close acquaintances of the couple suspect Shank’s partner. The district attorney confirmed that Astudillo has a record of domestic violence, triggering investigators to add that angle to the investigation.

Mexican police have tried to locate Astudillo for questioning, to no avail. Close friends of Shanks

believe he might be in Belize. According to a source close to Shanks’ family, Astudillo frequently visited Belize; thus, police suspect he may have crossed into the country. Another lead is that Astudillo could be in Puerto Vallarta on the Mexican Pacific coast. Mexican authorities found their burned vehicle in the municipality of Puerto Morelos on May 2nd.

One of the many theories is the possibility that they were both victims of enforced disappearance. According to a report from the district attorney, Shanks and Astudillo and their toddler were visiting an area east of their home in Merida, Yucatan, Mexico, called El Cuyo. The last time anyone heard from them was on April 30th, when Shanks contacted her family in Australia. Two days later, their 2-year-old daughter was found alone, in the night, on the streets of Cancun, Quintana Roo, 101 miles away from El Cuyo.

Search for Shanks under the Alba Protocol

Under this approach, the search involves a multi-tiered move involving different agencies. The Alba Protocol protects women and girls. Following the discovery of baby Adelynn alone in Cancun, authorities in Mexico issued an alert for Shanks.  A flyer for the missing Australian woman was then printed to try locating her. The Mexican authorities presume that both Astudillo and Shanks are still alive, and although they were last seen in the State of Yucatan, they believe they went missing in Cancun, Quintana Roo.

The authorities in Quintana Roo stated that Astudillo has a history of domestic violence, and another source indicated he was deported from the United States of America for fighting a police officer. Astudillo was also allegedly violent in previous relationships. Although he remains missing, the suspicion is that he is on the run.

Shank’s family traveled to Mexico from Australia following the incident. After getting assistance from the Mexican authorities, they returned to Australia with baby Adelyn. In a statement, the family said they could now focus on the investigation into Shank’s disappearance. “We will not give up hope,” they said. Shanks was due to travel to Australia in June.

As family and friends fear the worst as the days go by with no updates of Shanks’ Astudillo’s whereabouts, police in Mexico continue to follow leads. No new information has been released, and there is no confirmation that the Belize Police Department has been notified of Astudillo’s potential presence in the country.

Anyone having information is asked to email [email protected] or contact the local police department.