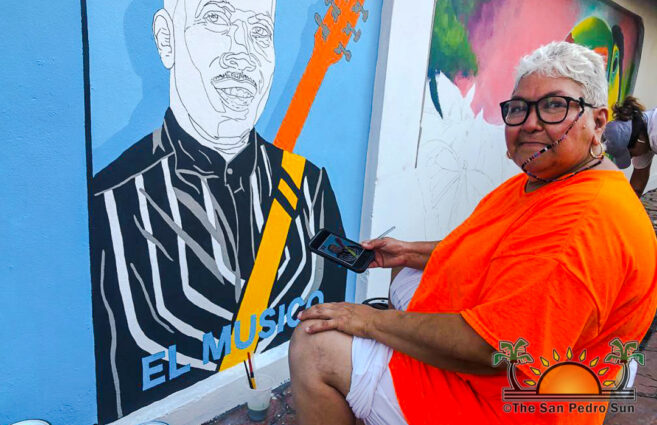 Two of these new murals feature Belize’s cultural ambassador, the late Andy Palacio, and the national bird of Belize, the Keel Billed Toucan, showcased on Barrier Reef Drive next to Holiday Hotel. The third mural features reggae legend Bob Marley on the façade of Hope Haven Children’s Home and Community Center on Lion Street. The last one is an interactive piece on Pescador Drive, across from the police station, on one of the walls in front of The Phoenix Hotel. 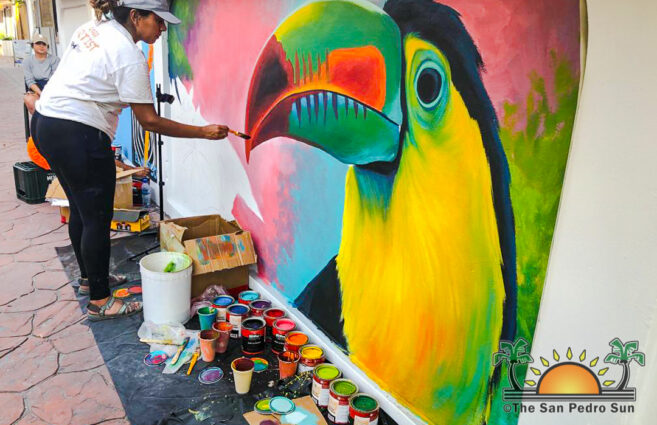 This time Alex and his mother, Sylvia, teamed up with some of the best artists from their area. Elizabeth Umanzor, and Franky Cardona. Umanzor, it’s a visual artist with over eight years of experience. Her works include murals, chalk art, and live painting for events. Cardona is another veteran in the art from Houston who specializes in portraits, graffiti/street, and murals. According to his bio, he has been recognized by the Major League Baseball, the National Basketball Association, and the National Football League. 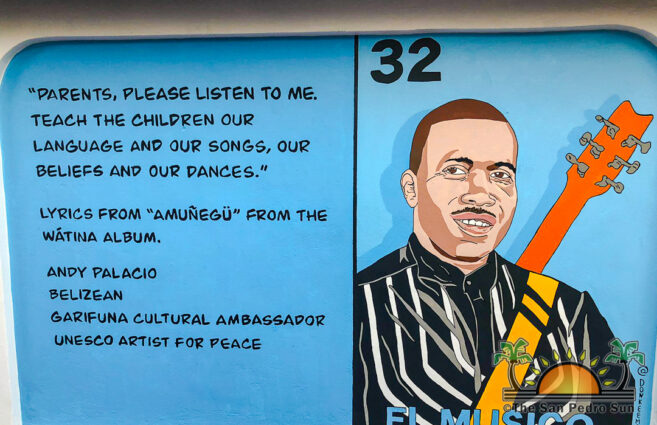 Works on the masterpieces
The murals required intense hours of hard work and dedication. On Sunday, May 15th, Sylvia and Elizabeth were observed by Barrier Reef Drive busy at work. While Alex and Cardona were at their respective areas working as well. Umanzor worked on the Keel Billed Toucan. Umanzor shared with The San Pedro Sun that painting something so important to Belize as its national bird was a privilege. She did not only choose the toucan because of the mentioned fact but because she is a nature lover. Umanzor said she loves birds and loves doing artwork featuring these creatures and butterflies and plants. 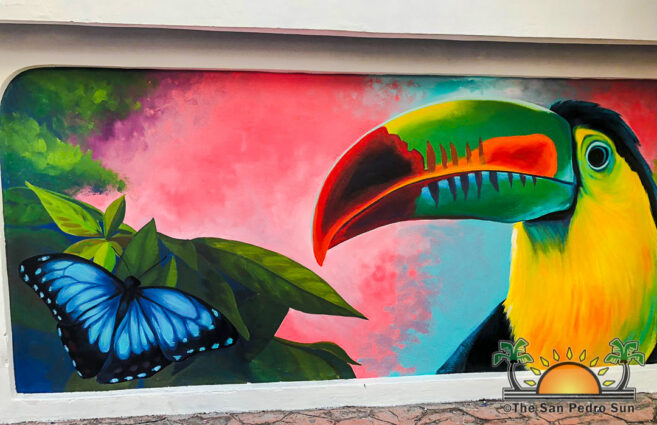 Sylvia’s artwork is a tribute to the late Andy Palacio. She admires people like Palacio and understands how important he is for Belize. Palacio, a proud Garifuna, was Belize’s cultural ambassador and a great musician known locally and internationally. He was a leading activist for the Garifuna people and their culture. Next to Palacio’s painting, Sylvia wrote a few words taken from one of Palacio’s popular songs in the Watina album called ‘Amuñegu.’ The lyrics encourage parents to teach children their language, songs, and culture/traditions.
While on the exterior wall of the Hope Haven building, Cardona was working on a portrait of Jamaica’s reggae idol Bob Marley. Next to his work, Cardona wrote the words, ‘Every little thing is gonna be Alright.’ According to him, Marley was all about peace and love, and that’s the energy the artwork hopes to generate. This portrait and message are fitting for Hope Haven Children’s Home. At this center, they help the vulnerable and abused. Cardona’s piece of art will now remind them that ‘Every little thing is gonna be Alright’ in their lives. 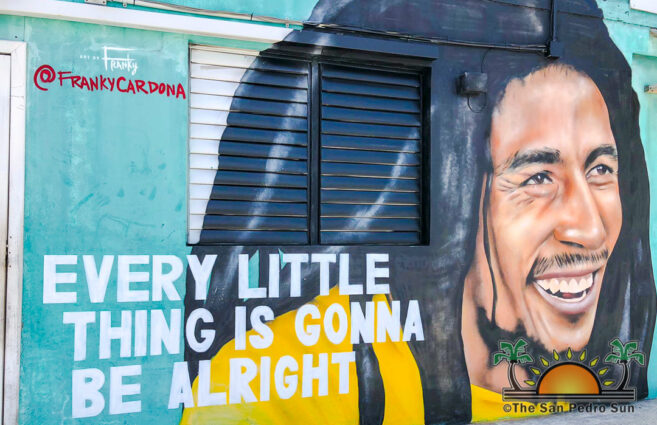 The final artwork by Alex at The Phoenix Hotel compound facing Pescador Drive has become a popular one with the photogenic. The painting is an interactive piece of art featuring a golf cart and a caricature representing Alex, holding a fishing rod. Alex stated that one of the reasons for the painting is for people to interact with it. This painting has the magic to allow the observer to become part of the artwork. When someone poises with the image, the photo appears as if the person is sitting on the golf cart. This detail has attracted many islanders to stop by and snap a picture. 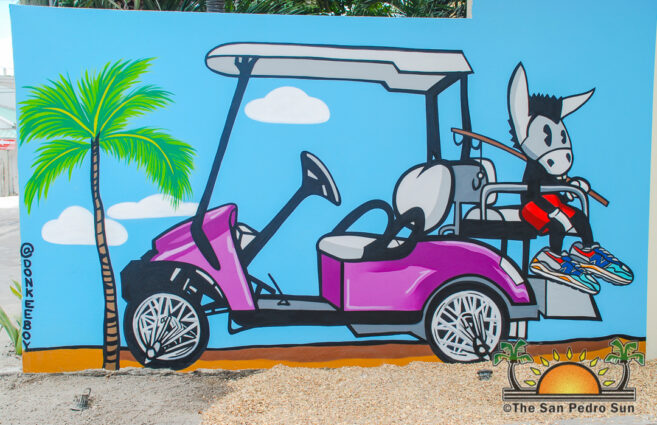 Well-known island philanthropists hosted the artists
Alex, and his mother Sylvia, were also accompanied by other members of his family. Along with Umanzor and Cardona, they were hosted by philanthropists and entrepreneurs Kelly McDermott Kanabar and Mukul Kanabar. The Kanabars are good friends with the Romans, and like their first trip here, were more than happy to host the artists on the island again.
Alex and Sylvia look forward to returning to the island in August of this year with more exciting projects. They also hope to join local artists and paint more murals across San Pedro.
To see more of their works, follow them on Instagram: Alex is on Instagram as @Donkeeboy, Sylvia is as @Donkeemom; you can also visit their website https://store.donkeeboy.com/.
Find Umanzor on Instagram under @lizzz.arts and visit her website at https://www.artwithliz.com/. Cardona’s Instagram is @frankycardona, and his work can be viewed on his website https://artbyfranky.com/.

Photos:Women in Art Exhibit launches at the Bliss