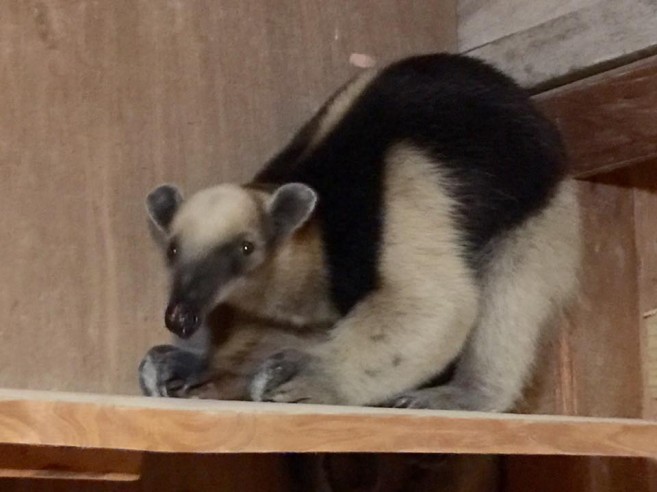 Another Collared Anteater was rescued in the downtown area of San Pedro Town on Thursday, September 8th. A group of neighbours on Angel Coral Street spotted the creature, also known as Tamandua, around midnight, and safely kept it until dawn before handing it over to the veterinary clinic at the San Pedro Saga Humane Society. At the clinic, the suffering Tamandua was found ill and appeared scared and in pain from an injury to its right arm. After an evaluation, the Tamandua was flown to Belize City where a wildlife surgeon did further check-ups on the creature before sending it to the Tamandua Refuge located at Caves Branch Jungle Lodge.

According to the findings from the team at Saga, it is believed that the Tamandua was someone’s pet and had been abandoned after Hurricane Earl. They said the creature was very friendly with anyone it came in contact with, adding to its vulnerability. A few nights before it was captured, it was reported that while attempting to climb a light post, it received an electrical discharge which caused an injury to its right arm. The injury disabled its ability to climb trees properly, which leads them to believe that the Tamandua may have experienced a few hard falls while attempting to climb trees.

Now that he is in safe hands and in a long journey to recovery, experts hope to repeat the success of ‘Tia’ the Tamandua. Tia was rescued in 2012 from the San Juan Area, and after going through several medical tests and spending some time at the Tamandua Refuge at Caves Branch, was successfully released into the wild.

The Collared Anteater is not commonly seen on the island, but at times has been reported roaming the streets in the less travelled areas of town, as well as the northern area of Ambergris Caye. It is a nocturnal, terrestrial and solitary creature which lives in trees and is found in Central and South America. As its name suggests, it feeds mainly on ants, termites and bees extracted after ripping apart their nests with their fore-claws. The average size of a Collared Anteater is around 23 inches in body length; while the tail would range around 19 inches with an average weight of about 13lbs.

Readers are reminded that it is illegal to keep ANY wildlife for a pet without a permit from the Belize Forest Department. To learn more about the work done by The Belize Wildlife Conservation Network please visit their website. To follow the works and efforts at rehabilitation at the Tamandua Refuge, visit TAMANDUA World.