Tia the Tamandua Returns to the Wild 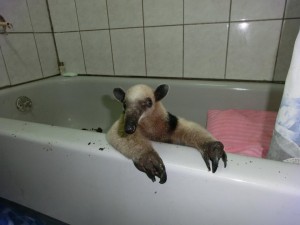 Many readers of The San Pedro Sun will recall a story we printed in volume #22, issue #19 dated May 10, 2012 of a Collard Anteater or Tamandua that was rescued in the San Juan area of San Pedro on May 6th thanks to the quick response of wildlife specialists Vince and Cherie Rose, of ACES, the American Crocodile Education Sanctuary. The suffering tamandua, affectionately dubbed “Tia” (aunt in Spanish) was found in ill health and appeared dehydrated and injured. After contacting the Belize Forest Department and Dr. Isabelle-Paquet from the Belize Wildlife Conservation Network it was decided that the animal would be transported to the new Wildlife Rehabilitation Center in Cayo where she was examined by wildlife veterinarian Dr. Isabelle Paquet-Durand. Dr. Paquet-Durand determined that the anteater had a broken middle finger on her left hand, which is the strongest one on the tamandua.

Following the anteaters’ health assessment Ella Baron from TAMANDUA World in the Cayo District took her under her care and on May 8th Baron reported to The Sun that the anteater had a good appetite, which was a good sign. Baron further observed that Tia had injuries to her back leg and major hair loss around her body most likely due to having rope around her body by people who illegally had her as a pet.  In a Facebook post on May 11th Baron wrote, “….she [Tia] sleeps where she eats, wakes up periodically to get a few more termites and goes back to sleep…we finished a “fall proof” remodeling of the enclosure for the tamandua/anteater and  managed to have her drink all her homeopathic medicines, vitamins – mixed with coconut water, but not in any container, she only drinks it straight from the coconut…from observing her for few days I can see how much damage was done to her, I finally understand where all the little wounds are from- she drags her dislocated leg a bit, and since it was not designed to be dragged- skin is very sensitive and breaks.. I can see a battered tamandua…but she has no anger in her.” 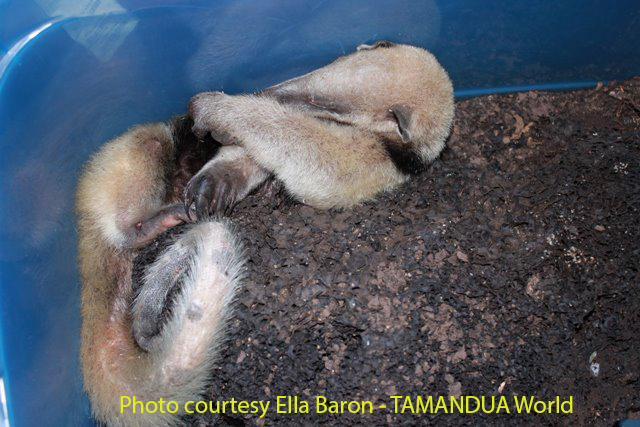 “Tia sleeps in the same container where she eats sometimes…she is so happy that termites are there right next to her, sometimes she hugs the termites nest and falls asleep like that too.”

In early June, Baron posted, “…she has now been in our care for almost one month. The broken paw seems much better and a lot of other injuries are healing as well, including small wounds. She is very happy, active- spends her days tearing apart 40-50 lb. termite nests, and then sleeps guarding them and she started developing better movements with her legs.”

Over the next several months Baron remained committed to the rehabilitation of the injured anteater, even traveling as far as Columbia in mid-June to attend a seminar on the rehabilitation of sloth, armadillos and anteaters. Throughout this time Tia’s health continued to improve and slow steps were made to reacquaint her with life in the wild. Baron posted Tia’s progress on her Facebook page and included animated photos of the little anteater that had captured the hearts of many. 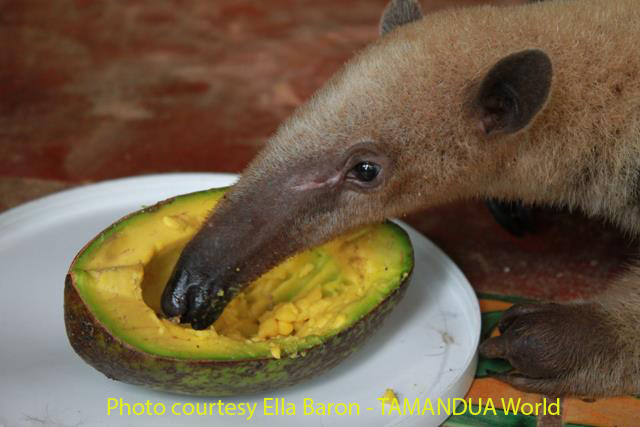 Four months later, on September fifth the fully recovered tamandua was released back into the jungle of Cayo where she demonstrated all of the traits a wild anteater needs to possess in order to survive.  With photos on Facebook and videos posted on YouTube Baron documented the moment where Tia returned to her proper home, healthy and clearly adept at living in the wild. 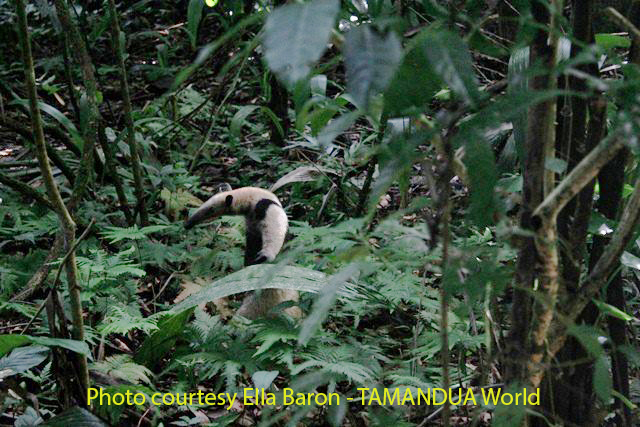 Upon her release, Baron wrote, “Even though we were watching her as quite as we could, she was very alert to any noise that was coming from us and going into the defensive pose.” 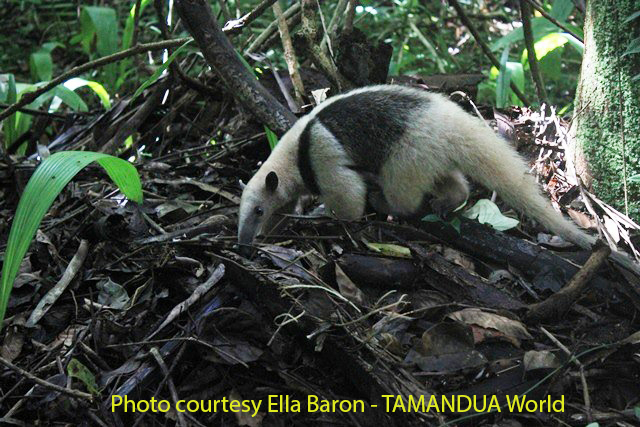 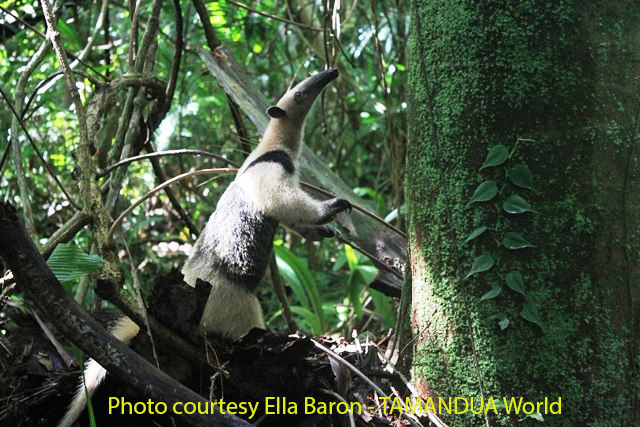 …then considered climbing a tall and very thick tree.” 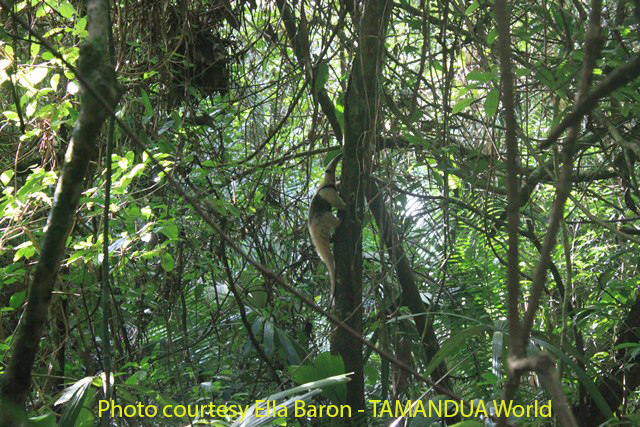 “She rejected the larger tree in favor of a thinner one full of vines and termites. We were happy to see that she abandoned grounds very quickly and went up into more protected territory.”

Not only is the story of Tia a testimony to successful wildlife rehabilitation, but in the broader scope of things it demonstrates the success of The Belize Wildlife Conservation Network, who collectively work together in wildlife conservation, preservation and rescue. The San Pedro Sun applauds the efforts of ACES/ American Crocodile Education Sanctuary, The Belize Forest Department, Jazmin Anthony Ramos, The Belize Wildlife Conservation Network, the Belize Wildlife and Referral Clinic, Dr. Isabelle Paquet-Durand, the Caves Branch Jungle Lodge and especially the one who had the hardest job caring and feeding this hungry little anteater for four months, Ella Baron.

The Collared Anteater is not commonly seen on the island but at times has been reported roaming the streets in the less traveled areas of town as well as the northern area of Ambergris Caye. It is a nocturnal, terrestrial and solitary creature which lives in trees and is found in Central and South America. As its name suggests, it feeds mainly on ants, termites and bees extracted after ripping apart their nests with their fore-claws. The average size of a Collard Anteater is around 23 inches in body length; while the tail would range around 19 inches with an average weight of about 13lbs.

Readers are reminded that it is illegal to keep ANY wildlife for a pet without a permit from the Belize Forest Department. For more information about The Belize Wildlife Conservation Network please visit their website at www.wildlifebelize.com or for information about TAMANDUA World visit www.tamanduafuge.org.