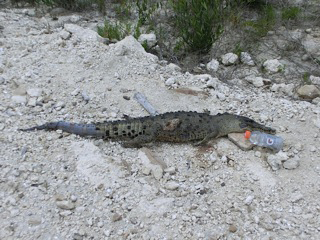 On March 30th American Crocodile Education Sanctuary (ACES) volunteer Chris Summers responded to a report of a dead crocodile at the Grand Belizean Estates area north of San Pedro. It was determined that the croc had been dead for a couple of days and due to the stage of decomposition cause of death was undetermined. It did however have a large machete wound on its right side in the abdominal area. It is estimated that the croc was approximately six years, not yet sexually mature. Less than one percent of American Crocodiles live to reach sexual maturity in the wild. When we add human interference, the number of survivors significantly decline. 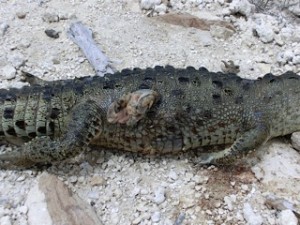 Crocodiles are a protected species in Belize and play a very important role in keeping our natural ecosystem in balance. Crocodiles even keep snapper populations healthy by feeding on the weaker and sick fish. Without crocodiles the island’s lagoons would be thrown out of balance and fish populations that residents depend on would become sick and eventually die off. Please remember not to feed, harass or molest crocodiles.

Not only is it illegal, but American Crocodiles are in danger of becoming extinct in our lifetime. Many tourists come to Belize to view these magnificent wild reptiles in their natural habitats. Any tour guide wishing to learn more about crocodiles and/or interested in training to assist ACES please email Cherie at [email protected] Thank you for helping to take a bite out of extinction!