Meeting to addresses the use of Fish Aggregating Devices


On Thursday 18th October 2018 at the San Pedro High School conference room, the Hol Chan Marine Reserve [“Hol Chan”] held a meeting along with the Fisheries Department, Department of the Environment, and the San Pedro Tourist Guide Association to address the creation of fish aggregating device (FAD) around Ambergris Caye. Traditional FADs are known as “Rama”. Fishermen have for many years created Rama’s on the leeward side of Ambergris Caye, where the benthic habitat is different from the reef, and there is not much shelter for fishes. Rama’s are intended to attract fish by providing shelter in an environment that does not have much areas for fish to hide from bigger predators. As fish aggregate to these structures it then becomes a good fishing site for fishermen. Rama’s were traditionally made from natural organic material, palmetto sticks, old tree trunk, and the like. However, the practice has turned to using old stoves, washing machines, vehicles, essentially anything that can sink to the bottom of the sea to create a FAD or Rama. 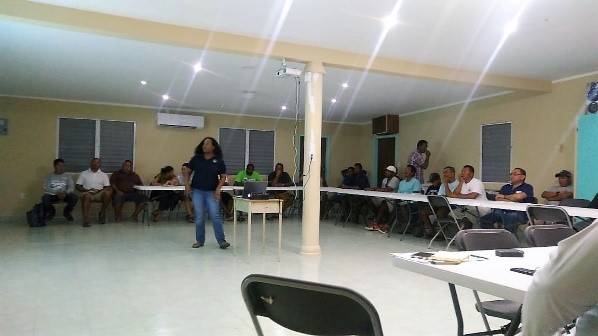 In a first attempt to start addressing the issue of dumping what essentially is garbage into the sea, the Department of Fisheries, and the Department of the Environment was called on to inform fishers, tour guides, and other stakeholders of the laws governing the dumping of garbage into the marine environment. It was made clear that dumping these items into the sea, and anywhere outside a designated Garbage Dump, is not only illegal but also extremely harmful to the habitat and marine life. Also present at the meeting was Mayor Daniel Guerrero, who gave the full commitment of the San Pedro Town Council in helping to address this issue.
The purpose of the meeting was not to stop people from their traditional way of fishing, but to discuss how it can be continued in a manner that does not have adverse effects on the environment. Mr. Miguel Alamilla, presented an alternative method that was developed by himself as a pilot project for Hol Chan. He presented the use of cement structures to create fish habitat, as well as the pros and cons of using this method. All in attendance agreed that the dumping of garbage should not be allowed to continue. Hol Chan has made a commitment to work with fishers, guides, and other stakeholders in Ambergris Caye on a way forward to ensure the methods being used are friendly to the environment. All stakeholders are encouraged to contact the Hol Chan Office to inform themselves of the environmentally acceptable and sustainable practices and the solutions that are being developed for implementation.

All persons engaged in the dumping of garbage to make rama’s are advised to stop this practice immediately. Anyone caught engaging in this practice will be charged under the environmental laws of Belize. Dumping under the Environmental Act, Section 12 is defined as the deliberate disposal at sea from ships, aircraft, tankers, floating craft or other marine vessels. Section 13.-(1) of the environmental laws of Belize states that “No person shall dump or dispose of or deposit any garbage, refuse, toxic substances or hazardous wastes in any place that may directly or indirectly damage or destroy flora or fauna, or pollute water resources or the environment.” The fines for dumping at sea under the Environmental Protection Act is a fine not exceeding $25,000 or imprisonment for a term not less than six months and not exceeding five years, or to both such fine and imprisonment.