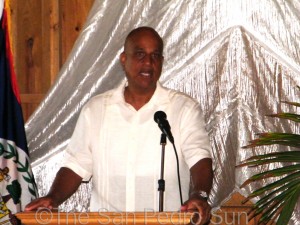 Press Release – Office of the Prime Minister – October 11, 2012 – The Prime Minister of Belize, the Hon. Dean Barrow, has offered his congratulations and thanks to the thousands of Belizeans from the Cayo District and across the country who participated in the San Ignacio/Santa Elena peaceful protest against crime. The Prime Minister views this latest mass action against the greatest scourge in our country, as a continuation of the same Cayo spirit and resolve that he highlighted in his Independence Day Address.
The Prime Minister also acknowledges that it remains Government’s primary responsibility to safeguard citizens in Cayo and all of Belize. He therefore reiterates the commitments he made in his meeting with the leaders of the Solidarity Movement for Justice and Peace. Accordingly, the Government of Belize will:
1. Immediately provide additional resources (including vehicles) to the Cayo Formation of the Belize Police Department;
2. Implement a sexual offenders registry and monitoring system;
3. Operationalize immediately after the official handover of the technology and equipment by the Canadian Minister of State in the Ministry of Foreign Affairs this Friday, the Integrated Ballistics Identification System
(IBIS);
4. Ensure, together with the Magistracy and Judiciary, the proper enforcement of the laws governing denial of bail in cases of sexual and other serious offences;
5. Fast-track the efforts with the Government of the United States to finalize arrangements for an expert in DNA Science to be attached to Belize’s National Forensic Science Service to mentor our local analysts as well as to act as a professional witness for cases having to do with forensic evidence.
6. Strengthen the Police Prosecution branch and institute greater coordination between the Police and the Office of the Director of the Public Prosecution to ensure more effectiveness in the investigation and preparation of cases for prosecution.
In ending, the Prime Minister reassures the Cayo communities and the entire Nation that the war on crime will not slacken but be heightened by increased human and material resource allocation.