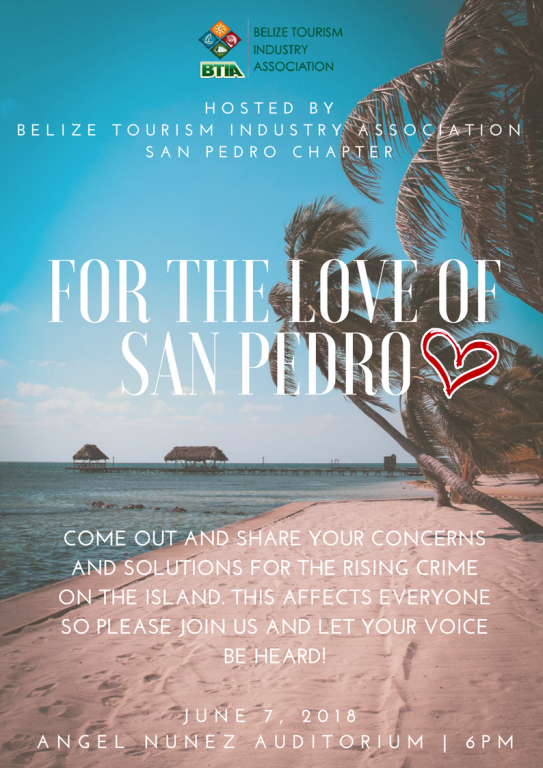 At the San Pedro Belize Tourism Industry Association’s (SP BTIA) monthly meeting, the primary topic of interest was the increase in crime on the island. Held at the VIP Lounge of Fido’s Courtyard & Pier on Wednesday, May 30th, more than 40 people were in attendance to debate the issue of crime affecting businesses on Ambergris Caye. The interactive gathering saw members and concerned citizens sharing ideas and suggestions on how to deter the escalation of crime on the island. At the end of the meeting the group decided to not only send letters of appeal to the Ministry of National Security and government officials, but to organize a public “For the Love of San Pedro” rally at 6PM on Thursday, June 7th at the R.A. Nuñez Auditorium, where the officials and island residents are invited to attend and share their support towards a viable solution to the crime situation in San Pedro.

SP BTIA Chairwoman Tamara Sniffin welcomed everyone to the meeting shortly after 7PM, briefing them on the alarming crime issues affecting the island. Everyone agreed that it is time to come together, demand better assistance from the respective authorities and to come up with a plan of action as an organization. Those in attendance shared their frustration and concerns about the recent crime incidents targeting businesses. In the past three weeks, three main crimes have occurred: the murder of a business owner, an armed robbery at a gas station where one the attendant was injured with a knife, followed by an armed robbery at a popular beach bar and grill, where the bartender was injured by gunfire. According to the group, not much has been done to address these issues and they fear who is going to be attacked next. 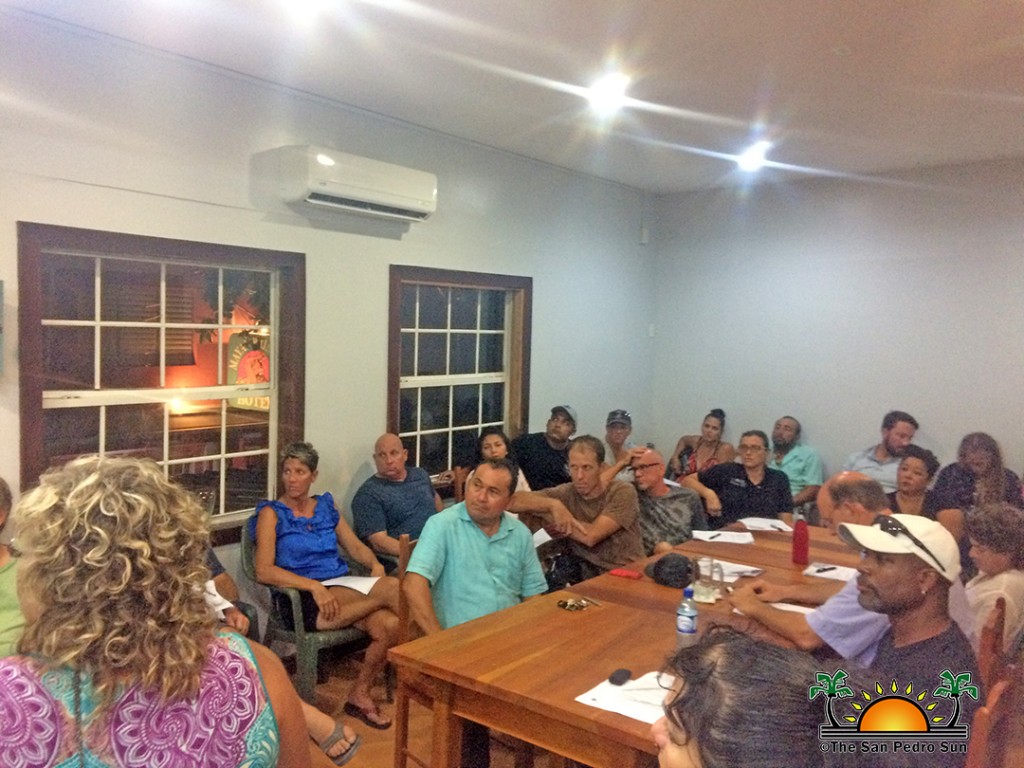 Recognizing the seriousness of the concerns, everyone demanded a permanent solution and they look forward to having the opportunity to speak with members of the local and national government regarding the issues. Some of the demands from the business community is a tougher judiciary system for criminals, police sub-stations manned 24-7, and more presence of police and tourism police on patrol, especially in areas vulnerable to criminal activities. The meeting also touched on the allegation that a percentage of the tourism tax revenue goes directly in to the Ministry in charge of the tourism police, and given the fact that Ambergris Caye alone generates a large chunk of tax revenue for Central Government, it is expected that the island’s security forces would be provided with the necessary resources.

On Thursday, May 31st rally invitations, voicing the concerns at hand, were sent to local and GOB officials and Prime Minister Right Honorable Dean Barrow quickly responded to SP BTIA Chairwoman Tamara Sniffin, stating that a safe San Pedro is a top priority. “We must protect the tourism product in San Pedro as the entire country benefits from it,” he told Sniffin. “We are completely committed to addressing this problem.” The Minister of National Security Hon. John Saldivar also responded to the Chairwoman and said, “This was discussed at a Security Council meeting we just had. The Commissioner [Whylie] will visit the island next week for further discussions. Be assured we are committed to arresting the problem.” Shortly after, Commissioner Whylie confirmed that he would be present at the community meeting. As of press time, BRS Area Representative and Minister of Tourism & Civil Aviation Manuel Heredia Jr. has not responded to the invitation.

In the meantime, the business community continues to be vigilant, hoping that the authorities will work with them to reduce crime. They urge all islanders to attend the public meeting next week in order to send a strong message to the Government that Ambergris Caye will not lose control to the criminal elements, and that their support is needed to ensure the safety of the island community.