Approximately $8,000 wase robbed from the Insurance Corporation of Belize Ltd (ICB) San Pedro Branch and Nation Wide Cash Express after a lone gunman assaulted the offices early in the morning of Wednesday, June 20th. According to the management at the ICB branch, located at the corner of Tarpon Street and Pescador Drive, the assailant was of mixed ethnicity and had his face covered at the time of the armed robbery. 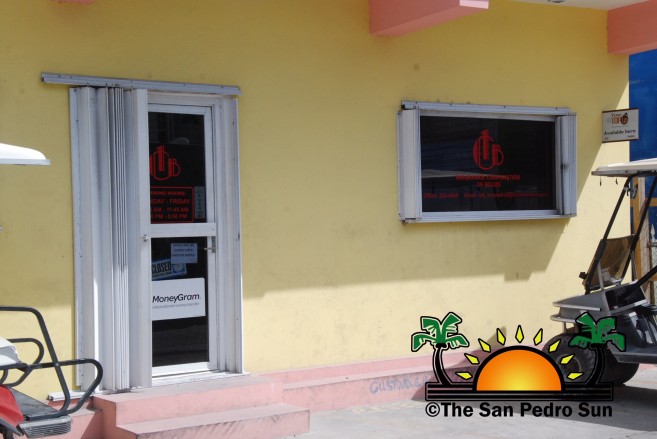 It was rumoured that a person had been detained following the incident, but the official police report did not confirm this. According to the report the San Pedro Police responded to a report at the ICB office where upon arriving they interview the office personnel of the company. Initial investigation revealed that about 8:02AM, upon opening for business, a male person entered the establishment and went to the Nation Wide Cash Express area, pulled out a firearm and proceeded to rob the cashier of a large amount of cash estimated to be near $8,000. Police have since launched an investigation to bring the culprit to justice.

Salvador Awe, Chief Executive Officer at Nationwide Cash Express, a subsidiary of ICB, told The San Pedro Sun that they will be improving their security measures at their branch on the island in order to mitigate any future attempts. Awe also added that the company is aware of the crime situation on the island and that they will do everything in their hands to provide a safer place for their customers and employees. He stated that at the time of the crime, no customers were inside the establishment.

The San Pedro Police is asking the public’s assistance in solving this latest act of crime that seemed to be plaguing the island business community. On Friday, May 25th, a duo surprised patrons and staff at Wayo’s Beach Bar and Grill and demanding money. During the assault, 26-year-old bartender Osner Campos was injured form a gunshot ricochet to the back of his head. The thieves then left with a undisclosed amount of cash.

Campos was taken to the Dr. Otto Rodriguez San Pedro Polyclinic II. He was later airlifted to the Karl Heusner Memorial Hospital in Belize City where he was listed in a stable condition. Campos recovered quickly, and by Monday, May 28th, he was released from the hospital.

Police later reported that two persons had been detained but no charges were ever laid on them.