The unplanned subdivision of San Mateo just north of San Pedro Town is finally beginning to get the attention needed to address the many issues affecting the area. The residents of San Mateo, estimated to number 568, have had to endure living in very extreme conditions as a result of the lack of proper infrastructure such as electricity, water and up to recently, inadequate street access. But after being repeatedly catapulted into the media, both at home and abroad, the relevant local authorities are beginning to focus their attention on the deprived subdivision. For that reason the San Pedro Town Council (SPTC) is partnering with the United Nation International Children’s Fund (UNICEF) to launch a clean-up campaign that the organizations hope will have a long term trickle effect on the entire community.

On December 17th and 18th, UNICEF and SPTC will begin their efforts in creating a better environment for San Mateo residents. According to Denise Robateau, Early Childhood Development and Education Officer at UNICEF, she is looking to address the children’s rights to clean water, proper sanitation and hygienic education. According to Robateau, people have been treating the area of San Mateo as a “dump”. With the presence of humans, especially kids and the fact that 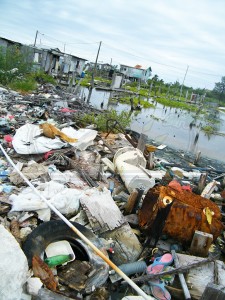 Holy Cross Anglican Primary School is in the area, it is a must that the needs for a healthy environment and for the proper stimulation be looked at. Robateau describes the situation of San Mateo as “unique” to the entire country and said the norm in which people treat the area as if it is a “dump”, highlighting that the women and children are living in close to deplorable conditions.

The total population of San Mateo represents approximately 5% of the total populace of Ambergris Caye which stood at 11,765 in 2010. 285 males and 283 females live in San Mateo, of which, almost half (270) are children below the age of 18 years.The entire area was built on swampland and in some parts of the subdivision, stagnant water combined with the garbage used as land fill creates a 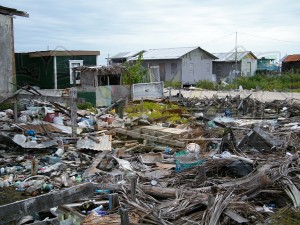 putrid stench, adding to the already stressed environment which is a health hazard for the residents. According to Councilor Kenrick Brackett of the San Pedro Town Council, San Mateo is the island’s “eye sore” but he remains optimistic that working together with the private sector and UNICEF, they can turn the image of San Mateo around.

As part of its outreach program, UNICEF believes that the donation of 50 garbage bins is only a start to an even greater project to help the conditions in the area to become livable by human standards. According to Robateau, during the two days of activities, UNICEF will be providing demonstrations that will include training on proper hand washing techniques and water sanitation processes. They will also be giving away material that 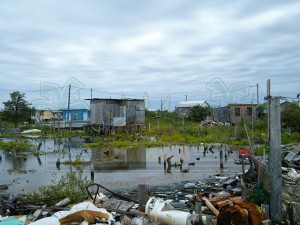 will help to highlight the need for sanitation, such as water bottles and garbage disposal equipment.

According to Brackett, who is the councilor responsible for sanitation and waste management, SPTC is ready to tackle the “eye sore” of San Pedro but needs “all hands on deck.” He hopes that San Mateo residents not only respond to activities geared to cleaning up the area, but the business sector, who has a vested interest in seeing that the areas with the most issues are being addressed since it is sensitive to the tourism fabric of the island. Brackett anticipates that the cleanup campaign will be a great start to a long term sanitary project not only for the area of San Mateo but for the island on a whole.

The SPTC and UNICEF invite all residents to participate in the campaign that will commence on Monday, December 17that 9AM in front of the Paradise Theater. The SPTC are expecting the presence of the Minister of Health Pablo Marin and the Minister of Education Patrick Faber at the start of the campaign.