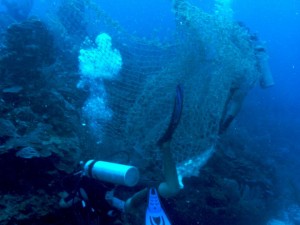 The net was spotted by a local guide attached to one of the dive shops on the island while on an expedition with some tourists the day before. The guide informed the reserve’s managing authorities of his findings. According to Kira Foreman, Marine Biologist at Hol Chan Marine 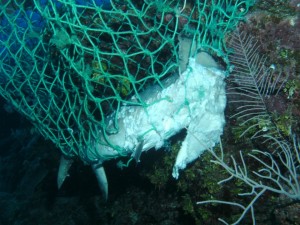 Reserve, the net was easily removed from the reef, since it was not as tangled as was believed. What was unfortunate said Foreman is that a small dead reef shark, about four feet long, was found tangled in the ghost net. “It appears that the reef shark was trapped for some days and the head of the shark was missing,” explained Foreman.

The ghost net had drifted in from the open ocean and it is believed to be a piece from a large fishing trawler. Notably, Belize is amongst the few countries in the world that placed a banned on the use of fishing trawlers in 2012. Additionally, the news of the dead reef shark is disappointing, since the area in which it was found is being monitored for rays and sharks as part of the Belize Shark Project. That project is aimed at raising awareness of the importance of these dwindling sea creatures in the ecosystem. Last year, a turtle covered in crude oil, was recovered in the same general area. Luckily after a long recovery period, the juvenile sea turtle, named Oily, was released back into the sea.