« Older: An Open Letter to the Prime Minister from Past BTIA Presidents
Newer: » Successful surgery performed on American Crocodile

The Belize Fisheries Department is engaged in a number of consultations across the country. A team of consultants were in San Pedro on Thursday, August 29th at the San Pedro Lions Den with the purpose of engaging fisheries stakeholders and the general public as they work to develop a Revised Fisheries Regulation. The revision of the subsidiary law is being conducted by the African, Caribbean and Pacific group of countries (ACP) Fishery II Program, with funds from the European Union (EU). 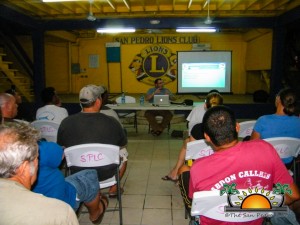 The main objective of the consultations is to gather input from fisher-folk and other stakeholders to provide meaningful dialogue to update the existing fisheries regulations. Dr. Chris Hedley is the main consultant tasked with the technical aspect of the Revised Fisheries Regulation. In an interview with The San Pedro Sun, Hedley said that the revised fisheries regulation project in Belize is a part of a larger undertaking by the Belize Fisheries Department with the assistance of Food and Agricultural Organization (FAO) of the United Nation’s (UN). “In this project, we are looking at three main areas that are of concern. As you know, a new bill was drafted in 2011 which has not become law (act) as yet. The expectation is for it to become law if not by this at least next year and the new bill will make a lot of changes to the current act which is very old and does not say much on how to manage fisheries in Belize,” said Hedley. “The first thing is to ensure that the proposed bill is consistent with the current act. The second thing is that there have been many additions (amendments) to the old act over the years making it difficult to read and understand. There have been some inconsistencies, and basically what we will be doing is consolidating it to make it more coherent and easier to use. The third thing is to look at what other changes can be made to the fisheries regulation. The first two points do not make many changes to the fishing rules in Belize; all it does is make clarification and specifications. But this is the opportunity to discuss with the fishing stakeholders which other changes they want to see included to improve the management of our fisheries.”

It is the hope that by updating the current regulation, it will strengthen the management of marine and island fisheries resources. One area that was highlights in the consultation is San Pedro Town had to do with limitation on size of fishery products, as well as limitation as to the number of fishing permits that should be given by the Fisheries Department. But while attendees were in general consensus that the Belize’s Fisheries needs to be better managed one area that created much discussion is the contradiction between commercial and recreational fishing. “The stakeholders want for the regulation to reflect a more improved and elaborate wording in these areas of concern. Certainly they want it to be specific as to the type of license granted and whether multiple types (sports, recreational or commercial) of license can be granted. These are technical things that we will have to take into consideration,” elaborated Hedley.

Because the EU is funding the project and time frame is driven by the availability of funds, the entire process will need to be completed by mid-November 2013. “We believe that by October, we should have a draft set of changes to the regulation – changes that we would have gathered from the consultations. Once that is completed, the Fisheries Department, working along with global FAO will do more consultations and reviews based on the initial recommendation,” explained Hedley. “As you know policies of fisheries worldwide falls under the supervision of the FAO so Belize will be getting the high level assistance from the global organization to review the draft fishing regulations.”

The revision process will complement the recently concluded “Fisheries Regulation Bill,” which is pending legal revision and approval for it to become law. Once the proposed bill is adopted as law (Act), then the regulation with the accepted revision is expected to be adopted.

Of note is that the proposed regulation on the harvesting of sardines in Belize, which has been up for legal review for a few years now, was also a centerpiece of the discussion at the consultation.

Representatives of the Belize Fisheries Department promised to add pressure on the policy makers to ensure that such a proposed sardine regulation is accepted.