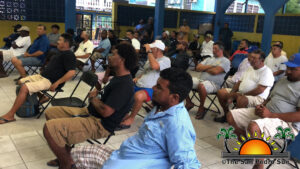 There was a heated discussion at the San Pedro Lions Den on Wednesday, May 25th, as fishers attended a public meeting with representatives from the Fisheries Department and the Ministry of the Blue Economy. The island fishermen claim their livelihood could be jeopardized by the recent amendment prohibiting fishers from trapping lobsters with a tail weight of less than 4.5 ounces, replacing the currently approved threshold of four ounces. The discussions, which have been taking place in other fishing communities in the country, ended up with the ministry agreeing to delay the new policy for one year to continue engaging the fisher-folks. Regardless, the San Pedro fishermen at the meeting said they reject the legislation and will continue rallying against it.

The Chief Executive Officer in the Ministry of the Blue Economy, Kennedy Carillo, briefly welcomed those in attendance at the public meeting that started just after 6PM. The Area Representative and head of the said ministry, Hon. Andre Perez invited the fishers to be part of the discussion and committed to compromise to move forward. Questions and suggestions followed a short presentation from Acting Administrator at the Fisheries Department, Rigoberto Quintana. His presentation included the fact that in 2009 Belize signed a binding agreement with the Organization of Fisheries and Agriculture in Central America (OSPESCA) to change the required sizes for lobsters and increase the gaps in the traps.

One of the most respected fishermen on the island, 78-year-old Wilfredo Alamilla Sr., shared his life experience as a fisherman for over 60 years. He pressed on the importance of engaging the fishing communities in decisions that will affect their livelihood. Alamilla pointed out that if the new regulation is to ensure sustainability, the current practices have been in place for decades, proof of sustainable fishing. Alamilla added that fishers are not the problem, but the lack of enforcement as other people who pretend to be fishermen are breaking the law. The proposed requirement of lobster tails weighing 4.5 ounces is considered a complicated matter that could dent the fishing folks.

Other fishers like Alfredo Rubio indicated that such new amendments to the fisheries laws would continue to be rejected because it is not beneficial to them. He welcomes the decision to delay the implementation of the new law for another year, but whenever future public meetings are held, he will oppose it. Fisherman turned tour guide Philip ‘Billy’ Leslie agreed with his colleague Alamilla that enforcement is needed. He noted the lack of consultation, not to mention the protection of ecosystems like mangroves benefiting the fishing industry. As 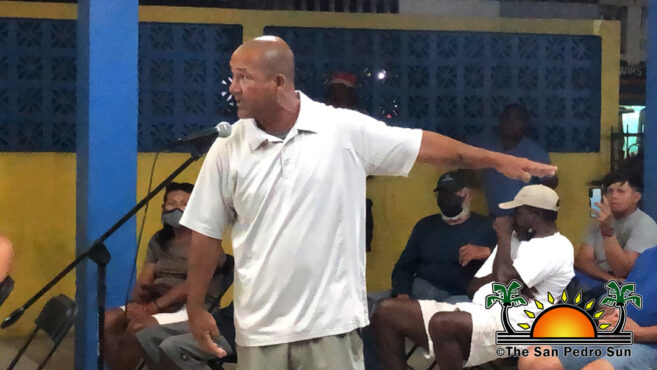 brought up by other fishers, the continued development in San Pedro is destroying large areas of mangroves. “We are not against development; we welcome sustainable development,” said Leslie. He pointed out that mangroves are nursing grounds for juvenile fish and lobster. “If the nursery grounds are destroyed, you cannot expect more fish or lobster,” he said. The fishermen emphasized that their production would decrease, and the product prices will have to increase significantly.

During the heated discussion, fishers also addressed the regulation to increase the escape gap size in the lobster traps. They said it would not work and reducing the number of traps in their fishing grounds would negatively affect them. They said they were aware of the OSPESCA agreement signed but at the same time blasted the government for not having consulted with the fishing community before signing such documents on their behalf. At the end of the meeting, it was clear that the possibility of fishers accepting the new regulations is very slim, and if there is an agreement, they want solid incentives.

Minister Andre Perez assured them that their suggestions would be considered. He assured them that no decision would be made without considering their concerns. Perez has received the same reception in places like Caye Caulker and Sarteneja in the northern Corozal District. He said these public meetings are to listen to the people who are the experts in the field. He understands their claims that it may be too early to implement regulation as fisher-folks are still recovering from the COVID-19 pandemic. “We did agree that it will be deferred for another year and then reach again to our people,” said Perez. However, Perez said that such regulation would need to be implemented sooner than later, but always working with the fisher-folks. According to the technical people in fisheries, Perez added that this new regulation should be given a try and see the yields as it is executed.

It is important to note that the OSPESCA agreement is binding, and Belize must implement the new fisheries law. Perez made it clear that the country could be sanctioned for failing to comply with said agreement leading to a catastrophic situation for Belize.